Marty Kavanagh has some bottle, Colm Galvin is silk and steel as Dublin and Waterford destroy

The men of Clare were men with points to prove.

Last weekend was a write off for the Banner boys. They didn't show up to Semple Stadium and Tipperary danced all over them.

Up next, a confident Kilkenny in Ennis with their main man Tony Kelly suspended. It doesn't get much tougher than that.

These boys were relishing that going into it and on Sunday, they made a statement.

They began like men on a mission and it was immediately clear that this, in front of an expecting Cusack Park crowd, was going to be a hell of a lot different from last weekend.

Their majestic midfielder and one of the most underrated hurlers in the country in Clonlara's Colm Galvin set the tone early on. His crisp first touch was a second ahead of everyone else's, his perfect reading of the game set him free and his gorgeous passing of the ball brought every Clare hurler into it and put Kilkenny on the back foot.

It was his measured delivery that set-up a 14th minute goal for the unmarkable John Conlon. From there, Clare never looked back.

END_OF_DOCUMENT_TOKEN_TO_BE_REPLACED

Galvin reeled off two gorgeous long-rangers to see out the first half and Clare went into the break with the lead and with the momentum. In the second, they showed great bottle and character to drive it home and to keep Kilkenny out.

That man Galvin was again majestic - his industry and elusiveness setting up the clutching goal that was brilliantly finished by Podge Collins.

Hat-tip goes to referee Paud O'Dwyer for giving the advantage to Galvin when he was fouled. Great refereeing. He later came back to give Paddy Deegan a talking to.

The first touch from Podge Collins 🔪

Clare at their best and not even Eoin Murphy can keep it outpic.twitter.com/1lzvtbk5l9

Galvin was that good but he was by no means alone. Diarmuid Ryan, brother of All-Ireland winning centre back hurled like his brother used. With pace, drive, power, skill and aggression.

Peter Duggan looked back to the form he showed last year while Podge Collins and Shane Golden were also very sharp. In defence, Jack Browne soared for countless high balls while David McInerney was solid.

It won't set Kilkenny back too far, they fought hard too with Deegan and Billy Ryan again impressive but it was Clare's day.

Watch an interview with the man of the moment here.

The scallion eaters mean business. They've been knocking on the door for a while, winning the Joe McDonagh Cup last year, giving Dublin a hard time of it in the first round and a weekend on, they've beaten the door down.

Galway - one of this country's most highly rated hurling teams were the guests in Cullen Park but they weren't given a warm reception. Colm Bonner's men laced into them from the word go in their own back yard and by the end of it, they were worth every bit of the draw they earned.

And what a result it is. The moral victories are great, winning the Joe McDonagh Cup is great but this is the top table and these are the biggest dogs in hurling.

END_OF_DOCUMENT_TOKEN_TO_BE_REPLACED

After 37 minutes, they were down on a scoreline of 0-12 to 0-7 but they never gave up. Galway took the foot of the pedal a bit and they took advantage.

Martin Kavanagh was nerveless on the placed balls for his team, Carlow's centre forward nailing ten frees and hitting one from play. Alongside him James Doyle, Ted Joyce and sub Chris Nolan made all the difference in attack while David English and RIchard Coady impressed in defence.

They reeled them in and a late equaliser, from the stick of the ever reliable Kavanagh from near the sideline, was hard earned and well deserved. 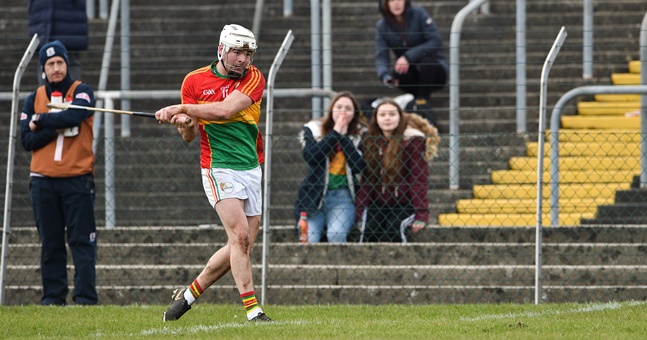 Two weeks into the National League and it's depressing times for Offaly.

They're really not at the top level anymore and by this stage, everybody in the county has realised that. Dublin, on the other hand were impressive in Parnell Park with Na Fianna's Donal Burke on fire with 0-6 from play from wing forward while the dandy Oisín O'Rourke scored 2-3.

A solid start to life under Mattie Kenny.

It doesn't get much better for the Offaly hurlers.

After clipping Offaly last weekend, Paraic Fanning's Déise were just as hungry again against inferior opposition. Pa Curran was the main man on Sunday with 2-2 from play and his return to form on the back of a few injuries bodes well for the county.

Great to see exciting young talent Pa Curran back in red hot form for the Waterford hurlers. He scored 2-2 from play in their defeat of Laois 💪💪 pic.twitter.com/rtPcDXnfLu

You may also like
1 week ago
Seven-time All-Star Goldrick using time off to strengthen and improve
2 months ago
"I'd spent hours and hours honing my left foot with my dad when we were young"
2 months ago
April club month a goner as virus threat causes longer delays
3 months ago
"That's not just handbags, there is a lot of really serious punches being thrown"
3 months ago
Monumental wind causes havoc in Healy Park for Dublin v Tyrone
3 weeks ago
No club football for nine years but Canavan was always going to make it work
Next Page