It was just another Monday morning in Magheracloone.

The Carrickmacross-Kingscourt road was busy, as is always the way on the route that links the four counties, Monaghan, Meath, Cavan and Louth.

The Fás workers went about their business. Opened the gates and up the hill, strimmers and lawnmowers in the back, there were a few jobs on in the GAA grounds before lunch, and the lads were eager to get going.

They looked around, looked again, looked at each other and gasped, they couldn’t believe their eyes. Magheracloone Mitchell’s GAA pitch was split in half like badly cut timber on a chopping block. Except the axe covered the width of the pitch, and had left bumps, bruises and wrinkles all around.

Their clubhouse and community centre had been cracked from tip to toe - all the parish's efforts in the years previous, to create a facility to house young and old - wiped out just like that, in one foul swoop.

A mine had collapsed under the surface. The damage permanent and unimaginable. 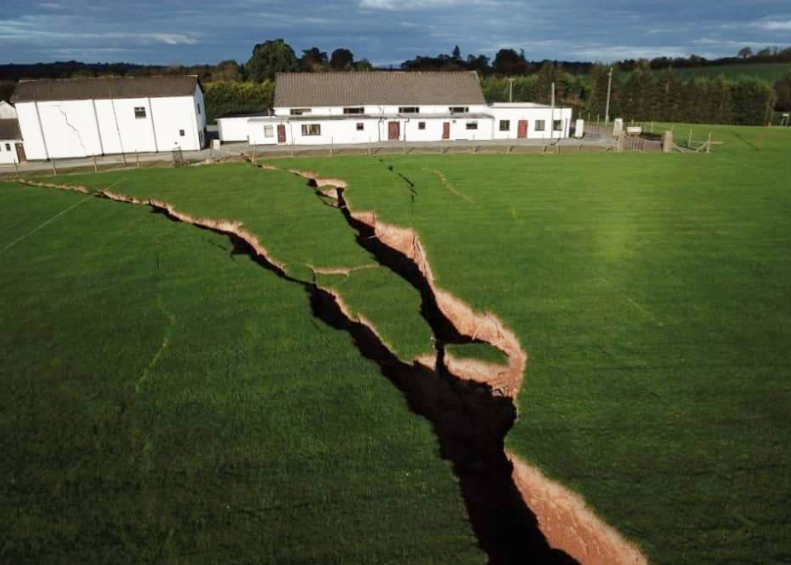 The lawnmower wouldn't be needed today. The lads rang Francis Jones. He’s the chairman of Magheracloone Mitchell’s GAA club and in a state of shock and panic, described the sight before them.

END_OF_DOCUMENT_TOKEN_TO_BE_REPLACED

That would be the first of 125 phone calls the chairman would receive that day. His phone would ring 130 times the next.

These were uncertain times in the Monaghan parish. Word spreads fast, and there wasn’t a person in Magheracloone this didn’t affect.

Peter Ward was building his house when the murmurs landed. Presumed it was an exaggeration at first but as the alarm bells rang louder and louder, suddenly the club’s Monaghan senior semi-final loss the day previous, paled into insignificance for the parish's sturdy full back. 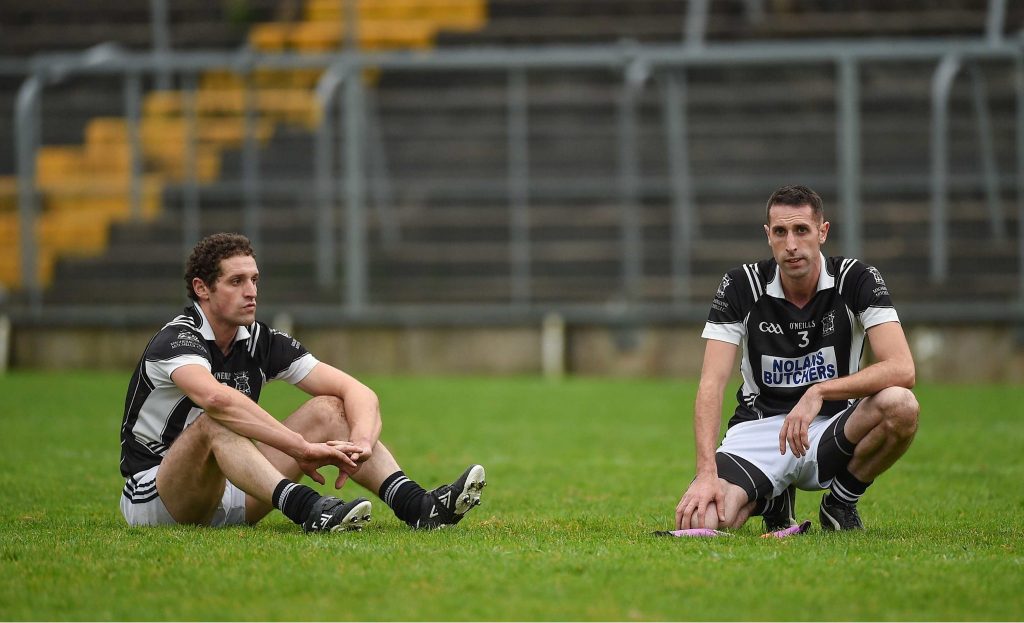 You don’t know true misery, until your club’s grounds are swallowed into the earth. Beaten by the elements, gates locked forever.

This barricade of agony, was only building up. Monday still, the local school was evacuated and five families were moved out of their homes. Roads were closed and half the parish was out of bounds.

“It felt like something out of a film,” says Jones.

This was the stuff of nightmares.

END_OF_DOCUMENT_TOKEN_TO_BE_REPLACED

It took a couple of weeks for the roads to re-open and one day, club stalwart Johnny Martin got out of his car to survey the field of dreams and so many memories.

He couldn’t even respond with the pain of it all, when another club member approached and remarked about the grimness of their demolished, unrecognisable territory.

It’s on that drive-by when it hits you.

Players, mentors and club members still find themselves heading for the old grounds when training is called but a ball will never be kicked in their home again. What a painful ultimatum, so jarring in its certainty.

The air is different up here, it would leave a lump in any throat, Magheracloone or otherwise. From bad to worse, the club were relegated only a couple of weeks later, from the Monaghan senior football championship. A blow they didn't need and hardly deserved, considering they'd played in the championship semi-final earlier in the year, but that's the way and complaining isn't valued around here.

So what do you do when the unthinkable happens? What can you do?

This is when Magheracloone, that little Monaghan parish with no village and only a few churches, schools and shops to boast, rises again. If ever you wanted to find out about the spirit of this club and this place, Monaghan senior football champions of 2004, a story was told over the coming months. 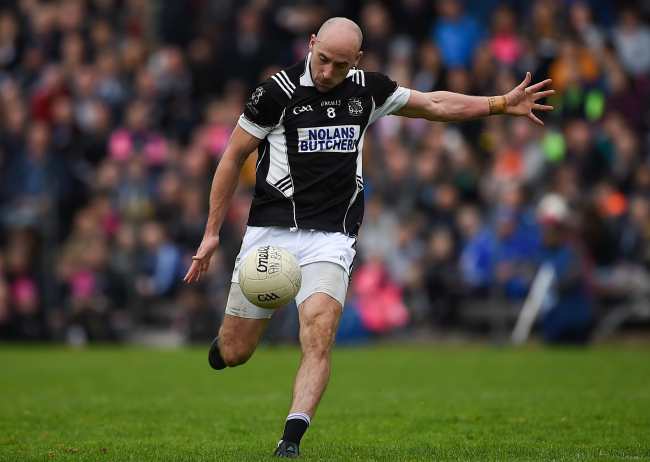 First port of call, they asked what had happened. Found out and moved on.

"We didn't dwell on the fact that we hadn't a pitch," says Peter Ward, club captain.

"It's up to the committee and gypsum (the mining company) and the community to thrash out a deal - we'll just stay out of that stuff, and look after our football..." 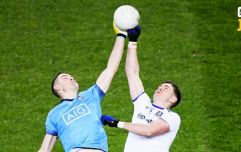 You'd love to have Niall Kearns on your team

END_OF_DOCUMENT_TOKEN_TO_BE_REPLACED

Meetings upon meetings were held. Committees were established. Within eight quick months, a temporary training ground had been planned, designed and built.

Temporary in name and nature - they can't play games here and the pitch isn't full size, but it's a lighthouse in a storm, and it will get them by.

A Go Fund Me page raised almost €11,000. Every last bit of it was needed as fundraising pushes throughout the club, went into overdrive. Everybody put their shoulder to the wheel and many put their hands in their pockets.

The initial worry was that they’d lose juveniles, they’d barely lose a session. Parents brought their kids to grounds in Meath, Louth, Cavan and further afield in Monaghan, just to keep this club alive and this identity from falling.

Those people and players saw parts of the country they thought they'd never see. Local clubs and their generosity saved the thing.

Shercock, Simonstown, Meath Hill, Drumconrath roll off the tongue. Annaghminnon in county Louth, offered a field, no questions asked, no restrictions placed, that will be Magheracloone's home ground for the foreseeable future.

But the biggest remedy of all, was yet to come. The adult football team had dropped from the Monaghan first division the year previous and pitch or no pitch, they had a chip on their shoulder this time.

"When we met in I think it was November, we said by hook or by crook we’re coming back up senior," said Ward.

It was around September when the green shoots showed, Magheracloone Mitchells cruising through the early rounds of the Monaghan Intermediate championship.

They'd breeze past Donaghmoyne in the final too, what a difference a year makes. Some story really, but these lads aren't into romanticisms.

"I wouldn't say we didn't enjoy it as much, but it was just more relief that we got the job done, and that we were going back up senior," added Ward.

What a difference a year makes....
This is what dreams are made of 💫
Well done to all the lads and management!! 👏🏆👏 pic.twitter.com/xz4bI3j2ax

On they went into Ulster with the minimal of fuss, they didn't want headlines or attention and the Mitchells were again too good and too hungry for their rivals. Redeemed and born again, they beat Tyrone's Galbally by five points in the final. You can't keep a good club down, and that was a special win.

With an All-Ireland semi-final against Mattock Rangers on the horizon, all the talk in Magheracloone now is about their brilliant football team. Car-loads hop out for training in Simonstown, county Meath on game week, not a bother on them. It's more than 45 minutes from home but there's 30 plus fellas training and plenty of background help too.

"It's easy get lads to train when you're in an All-Ireland semi-final," says Ward.

Stalwarts and legends of this club, meanwhile are delighted to be following their own, long into the winter.

They've no pitch, but there's some spirit in this parish.

They lost their pitch, they’ve no clubhouse and they go to a different province to train.

But @monaghangaa champions @MitchellsGAA_ stuck together through it all and now they’re in an All-Ireland semi-final 👊 pic.twitter.com/lNEDb2JATX

You may also like
1 year ago
Magheracloone: Back from the brink
1 year ago
Ciaran Thompson's joke of a left peg shows Naomh Conaill can do it every way
1 year ago
Defenders do everything right yet Conor McManus kicks boomer off balance and off the left
1 year ago
Penalties the name of the game but surely there's a better way
1 year ago
"You had one job Oisín!" - McConville draws Armagh away to Monaghan
1 year ago
Monaghan facing recent conquerors as qualifier draw made
Next Page