"A lot of lads are very disappointed they never got to put on that jersey." - Kieran's College delighted to be back hurling

The St Kieran's College supporters were chanting 21, 22, 23 or however many Croke Cups they'd won at the time and, in response, the Ard Scoil Rís boys went something like 'that's grand, but have ye ever won a Harty?'

That's grand but Ard Scoil Rís have never won an All-Ireland. They'll be looking to change that next Thursday.

The Croke Cup has seen some magical clashes between these two schools in the last decade but, on a day as historic as Patrick's day and in a ground as sacred as Croke Park, next Thursday's showpiece All-Ireland final promises to be something special. 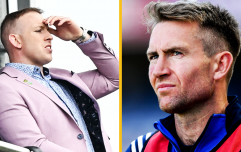 END_OF_DOCUMENT_TOKEN_TO_BE_REPLACED

2021 was a strange year in Ard Scoil Rís and it was an even stranger year in Kieran's College because, in a school so renowned for its hurling, things felt a bit off when they could do nothing else only get on without it. Contact training wasn't allowed so, as the schools' joint-manager Brian Dowling tells us, they went running in the hope that it might come back. But it never did.

"We had big numbers out," Dowling tells SportsJOE.

"I suppose they had the hope in their minds that it might come back at some stage during the year but it never did. A lot of lads are very disappointed they never got to put on that jersey."

Schools hurling was off and, taking dreams and stopping what some see as a rite of passage, some boys never got to play for the senior team. Dowling and his co-managers Richie Ruth and Michael Walsh felt for those lads.

END_OF_DOCUMENT_TOKEN_TO_BE_REPLACED

"It was a huge blow to lads. Some lads got no schools' hurling whatsoever, if they weren't on the team the year previous. Everyone wants to be playing a bit of hurling outside of the school-work just to freshen it up and keep the minds fresh. They weren't even in school then too, a lot of it was online so it was a disappointing year for everyone." 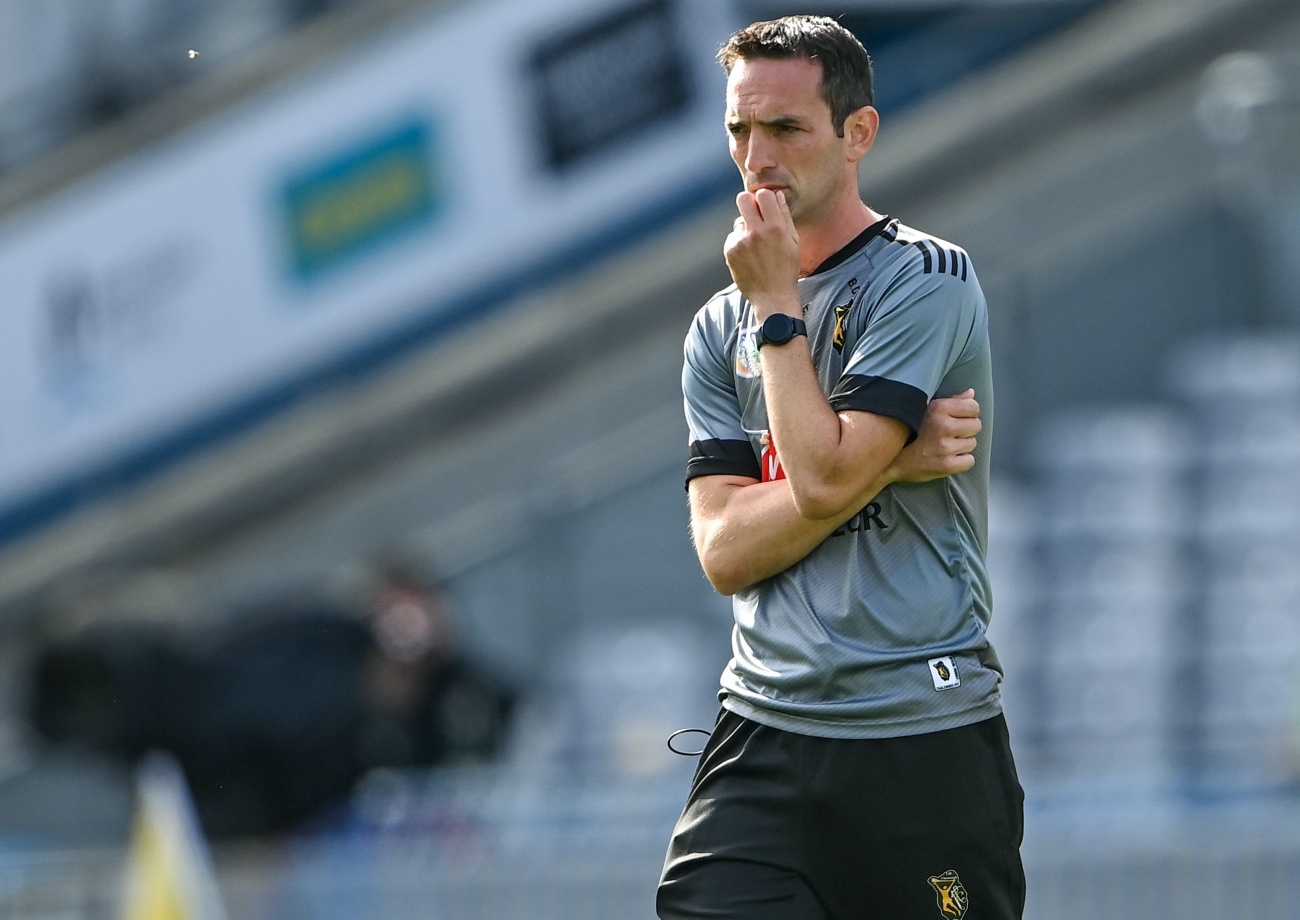 "But look, what can you do? The lads who were in fifth year, they're delighted to get back now, to be back hurling. They are appreciating it a lot more because I suppose it is only when things are gone that you realise what you have and how lucky you are to have it." 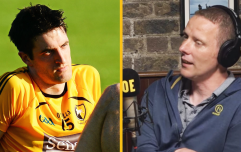 END_OF_DOCUMENT_TOKEN_TO_BE_REPLACED

They certainly feel lucky now. Kieran's were beaten in this year's Leinster semi-final but seeing as it was an amalgamation school that beat them, in Dublin South college's, they were given a second chance. It's unusual that they'd need it so hardly surprising that they've seized it.

"We deserved to lose that day, didn't play well enough, but the lads have knuckled down to it again. We knew we were lucky and we had good wins against Kilkenny CBS, Gort and Tulla since and I'd say, getting that setback stood to us in the long run."

And they're in familiar territory now. Dowling is delighted the All-Ireland final will be played on Croke Park, that it will be live on TG4 and that it will be on Patrick's day because it will be some occasion.

"Fair play to the GAA for putting the final in Croke Park. It's every young lad's dream and none of our lads or the Ard Scoil boys have played in Croke Park before so - maybe only the mini sevens at half-time so it's great. It's going to be a great occasion for the school.

"I'd say there'll be a lot of buses going up (from Kieran's). We always have great support in Kieran's, the lads have a great day out singing in the stands and the terraces so it will be brilliant for them. We played Ard Scoil Rís in the past and there was a great sing-song between the two teams and look, that's what it's all about." 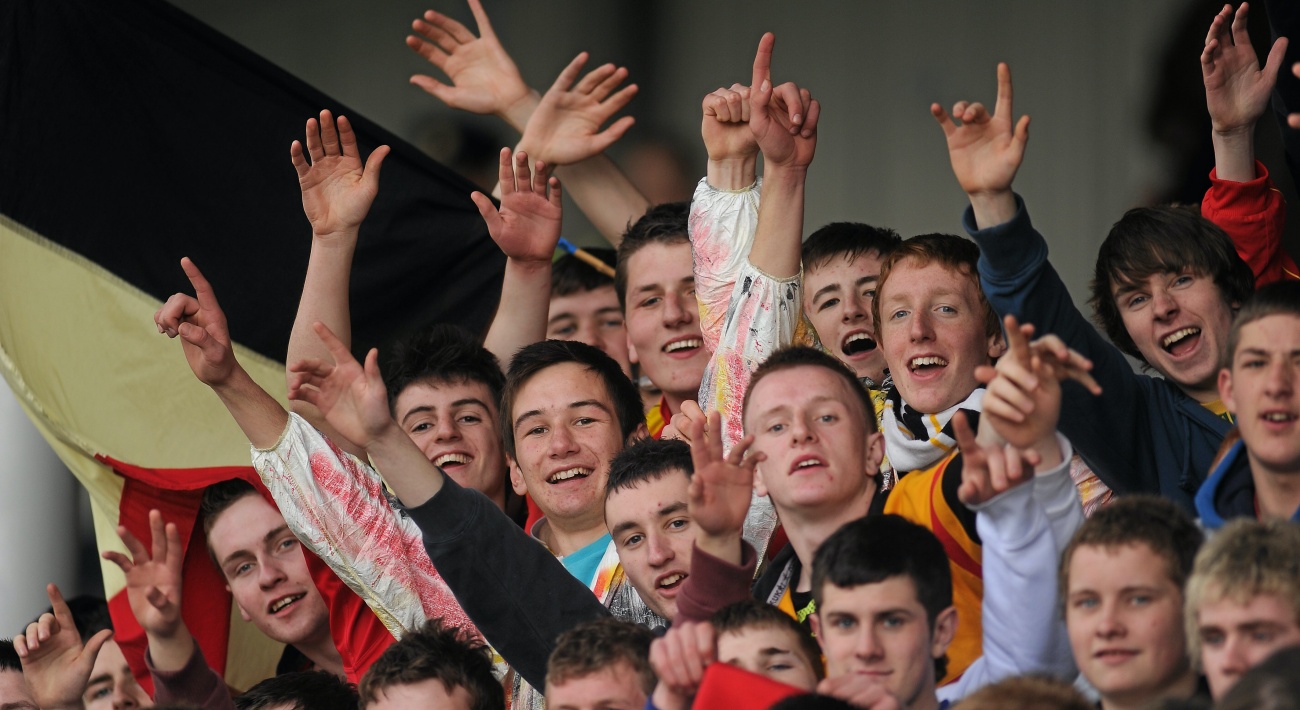 A section of the Ard Scoil Rís supporters during the 2010 Croke Cup final. It was a game the Kilkenny school won by three points

"But for us look, and the same for Ard Scoil Rís, it's all about winning and we'll stay focused on that. We'll focus on our job and try and win this game."

"It's fairly full-on! Been lucky enough there's been nothing clashing on the Saturdays, I've been going alternative Saturdays. If we stay winning I won't mind, only if we start losing I'll worry about it."


popular
Damien Comer targeted in brutal, chaotic Armagh and Galway brawl
Roy Keane makes good on bet after seeing Cork fall to Dublin
Shane McGuigan does a 'Sueey' Cristiano Ronaldo would be proud of after winning MOTM
Conor Gleeson's gesture to heartbroken Ethan Rafferty a tonic after sideline brawl
Liverpool set £60m Mo Salah price as contract talks continue
Malcolm Ebiowei 'ignored Erik ten Hag text' before signing for Crystal Palace
"I have decided to stay in Ireland" - Oisin Mullin gives Mayo fans the news they have been praying for
You may also like
4 weeks ago
"I think it's important" - Walsh encourages more women to get involved in management
1 month ago
Limerick manager showed some sportsmanship after phantom point in under-20 final
1 month ago
Kilkenny corner back does what every defender is supposed to do to win All-Ireland under-20
1 month ago
Time stands still for Damien Reck with incredible goal-line clearance
1 month ago
Brian Cody doesn't entertain Anthony Nash question about Henry managing Galway
1 month ago
Wexford wonder-sub proves that nothing beats being there with a moment of absolute madness
Next Page