They said the championship was beginning with a whimper.

They said it would it would make much more sense for the summer to begin with a game rather than a formality. They said London didn't even have a prayer.

These exiles are a proud bunch though. As Owen Mulligan said last week, the fight these players wage is much more than the standard battle against oneself in training.

They've to fight to keep the GAA culture and the clubs alive over there. Getting to training is never easy. It's a long commute for most players that often stretches their days into the early hours of the next one and the facilities aren't great either.

These are a hardened bunch. They put their lives on hold just to keep on playing the GAA in London. That was always going to stand to them.

London went down, but they went down fighting.

In front of a giddy crowd of expats, an inspired London team put up one hell of a fight in Ruislip to ensure the first game of this football championship was far from the one-sided drubbing many had tipped.

The 12/1 outsiders played with plenty of confidence and abandon on their home ground and Galway will have been relieved to get home alive.

As predicted, it was Kevin Walsh's side who started the brighter in McGovern Park. Shane Walsh slotted over an early free and points from Tom Flynn and Michael Daly helped them into a 0-6 0-2 lead early on. It would have been more only for Danny Cummins' shot being cleared off the line but Killian Butler and Conor Doran were keeping London in it.

END_OF_DOCUMENT_TOKEN_TO_BE_REPLACED

That man Butler is London born and raised but the Tír Chonaill Gaels club man lives for our national game and his well taken goal on 20 minutes gave Ciaran Deely's side a lifeline when the Tribesmen were threatening to pull away.

0-8 to 1-3 the scoreline stood on then and the Exiles were back in this game. They finished the half with a scoring flurry and as word filtered back to Ireland of the 1-6 to 0-9 half-time score, Gaels all over began to get a little bit excited.

The Championship is here. All eyes on Ruislip.

Galway steadied the ship straight off the bat of the second half though. They hit the first four points of the half with their marquee duo of Shane Walsh and Ian Burke coming into the game more. 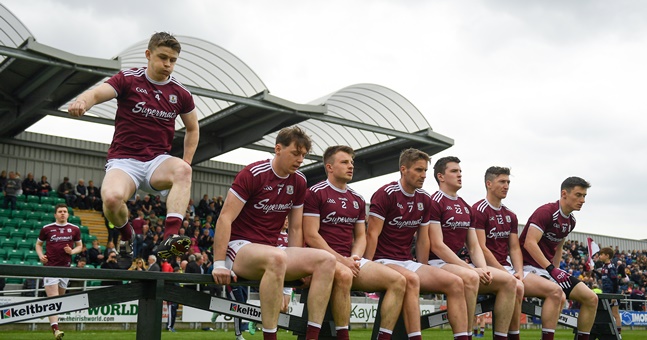 London weren't done yet though. The deadly full forward line of Doran, McMahon and Butler kept on causing problems for the maroon rearguard and they once again whittled the lead back to two points.

Galway went three up again after a Walsh free and then London had their chance. After a free-flowing move up the field, the ball came to that man Butler who's shot scurried just wide.

Walsh kicked another free and Galway held onto win by four. Sligo up next, they got away with this one.


popular
Justin Gaethje tells Conor McGregor to wait his turn
QUIZ: Correctly identify these World Cup 2014 players from their stickers
The SportsJOE 12 o'clock quiz | Day 73
QUIZ: Can you name the Football Italia cult heroes? | Part 2
The SportsJOE 12 o'clock quiz | Day 72
QUIZ: The toughest football legends quiz you'll take today
SportsJOE 2000s Football Quiz | Round 3
You may also like
1 month ago
"The bigger the challenge, the more Fitzy would want to keep them scoreless"
1 month ago
"He had no interest in the trappings of success, he just wanted to achieve it"
2 months ago
St Patrick's day memories: Rural Caltra with one of the great underdog triumphs
2 months ago
Corofin clean up in club team of the year awards
3 months ago
Shane Walsh is ready to rule for Galway
4 months ago
GAA JOE club football team of the year
Next Page