This Limerick panel looks determined to collect as many trophies while they are in form and having players contributing all over the pitch. 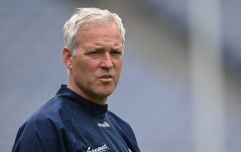 Galway search for new manager as Shane O'Neill steps aside

END_OF_DOCUMENT_TOKEN_TO_BE_REPLACED

John Kiely's men are the reigning All-Ireland and league champions after their Division 1 Final victory over a game Waterford side at Croke Park today.

Aaron Gillane got the only goal of the game as, after 26 minutes, he flicked a Tom Morrissey howitzer pass on by Stephen O'Keeffe in the Deise goal. It was a sumptuous strike.

Gillane was covering every blade of the full forward patch, in both halves, and he was next to impossible to keep quiet. Limerick's No.13 scored 1-5 from play and added another four from placed balls.

It did not go all his own way as seven efforts were either pulled or skewed wide of the sticks. He came off with 10 minutes to go and, seated on the bench, received a warm reception from the Limerick fans when he was announced as man of the match.

In his post-match chat with TG4, Gillane delivered that typical, demurring GAA interview:

"Ah sure look, I'm sure it was a good performance to get over the line but, look, I'm sure we'll have a look at it and there will be plenty to work on."

As for his cracking goal, it was more of the same:

"I just flicked it. I don't know what I was doing. It was the only thing I had on target all day."

We are not buying it. Tom Morrissey and Aaron Gillane knew exactly what they were up to. Those two Treaty players were good, but a mention to the likes of Cian Lynch, Gearoid Hegarty and Peter Casey too. Lynch was as good today as he was in that drive to the Liam MacCarthy last autumn.

As for Waterford, O'Keeffe was brave as ever, Jamie Barron and Pauric Mahony had good flashes and Stephen Bennett kept the scoreboard ticking over.


popular
The most Stone Age tackle you've ever seen gets South African lock straight red card
Ryan Manning hacked to the ground by Henri Lansbury in ruthless assault
Galway fans' frosty reception for Davy Fitz doesn't make any sense
"Johnno went, 'We’re not moving! You're trying to mess us about!'" - Ben Kay recalls red carpet controversy
"Some of the generals wanted me executed" - Irish rugby legend on flag caper that went wrong
Neil McGee hasn't worked in eight weeks after back injury but still won't rule out championship return
Wallabies star bounces off Duane Vermeulen like a brick wall, gets yellow-carded
You may also like
3 weeks ago
"You don't want to see that ever on the field again" - Colm Parkinson on Cian Lynch incident
4 weeks ago
Shane Kingston named to start All-Ireland final as Rebels make two changes
1 month ago
"We could have won it, but the better team wins these matches" - Brian Cody gives honest review of Cork defeat
1 month ago
Tim O'Mahony's GPS tracker had to work overtime to follow the Cork star's running against Kilkenny
1 month ago
Less is more as the GAA TV schedule circles the semi-final stages
1 month ago
Davy Fitzgerald steps down as Wexford boss after five years in charge
Next Page