Another cracker in Croker!!

A packed out crowd was present at HQ for the All-Ireland hurling semi-final between Cork and Limerick. The crowd gathered in anticipation that we would be treated to another rip-roaring contest akin to yesterdays game between Galway and Clare, which ultimately ended in a draw after extra-time.

The two sides met in the Munster championship round-robin series at the start of June. On that day the crowd at Páirc Uí Chaoimh were treated to a game of the year contender, which finished all square. This game was eerily similar.

The story of the first half was Cork managing to hit ten wides, whilst Limerick coughed up three goal chances. Corner forward Aaron Gillane twice attempted to find the net with the boot but only managed to get one point from both attempts.

The Rebel county, led by captain Seamus Harnedy looked the better side and this beautiful side-line cut by Mark Coleman put Cork two ahead heading into first half injury time.

Cork looked set to go in ahead at half time. That was until Limerick popped with a goal in the final minute of the opening half through Cian Lynch.

Watch the full highlights of another All-Ireland SHC semi-final cracker tonight on The Sunday Game from 9.30pm https://t.co/y1qinfr2TD #RTEgaa pic.twitter.com/0nbQEe48aV

The second half started with the same pace and ferocity as the first with both teams trading score after score in the opening five minutes to leave things level on the 40 minute mark.

Cork edged ahead once again before the first big moment of the second half arrived. Limerick broke forward in numbers, before Lynch was denied a second goal by the brilliance of Anthony Nash.

END_OF_DOCUMENT_TOKEN_TO_BE_REPLACED

This marked the fourth goal opportunity in the game for Limerick, with only one being scored. Cork subsequently went up the field to score through Patrick Horgan to extend their lead.

Conor Lehane then hit the back of the net for Cork on 52 minutes to put Cork five points ahead. The Rebels looked to have stamped their authority on the game with a little over 15 minutes remaining.

Lethal! Conor Lehane nearly bursts the net with a scorching finish for Cork.

Lehane followed up his goal with a monstrous effort to put six between the sides. The Treaty men clawed their way back into game as two points in a row left the game at 1-24 to 1-20 heading into the final 10 minutes of the game.

Limerick refused to panic in the closing stages as Cork extended the lead to six once again, this showed as youngster Kyle Hayes made a barn-storming run underneath the Hogan stand before sending over a score. Aaron Gilliane followed up with a free to leave three points between the sides with four minutes remaining.

A huge moment passed by for Limerick as one over-cooked hand pass spurned a certain goal for Peter Casey. Fortunately for them they won a free which was pointed by Gillane.

A missed opportunity by Cork led to a score by Aaron Dowling which left only one point between the sides on 70 minutes.

It was all to play for as the game entered four minutes of injury time. Gillane pointed for the tenth time in the match to leave the sides level at 1-26 apiece.

What followed this was an absolutely stunning save by Limerick keeper Nicky Quaid denied Cork what would surely have been the match winning goal. 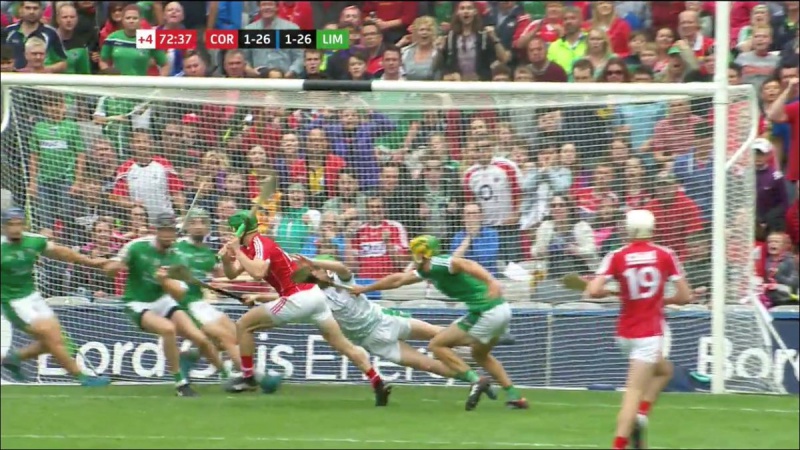 Hero of the hour, Aaron Gillane pointed a free in the final minute to put Limerick in front with 40 seconds to go. Despite spurning a few goal chances in the first half, Gillane stood up when Limerick needed him most to drag them back into the game when all looked lost.

It looked like Limerick had snatched it, that was until a free from Patrick Horgan in the final seconds ensured the game, just like yesterday went to extra time.

This Patrick Horgan free sends the game to extra-time! pic.twitter.com/PQd29S3SgT

Extra time began as frantically as normal time had finished as Limerick spurned another goal opportunity. The first period of extra time petered out as both sides seemed to be fatigued from what was an absolutely titanic 70 minutes. The first half extra time finished with Limerick leading by one point.

The sides entered the final ten minutes of a pulsating encounter. Limerick were awarded a penalty after with six minutes remaining. Shane Dowling stepped up and rattled the top corner of the corner of the net.

Pat Ryan then lobbed to the net for another Limerick goal to surely finish Cork off! The Treaty men led the game by seven points with two minutes remaining and looked to be heading into their first All-Ireland final since 2007.

Cool as you like, Pat (Le Tissier) Ryan lobs to the net and Limerick are heading for the All-Ireland SHC final

With three minutes of added time Limerick led by six points, until Barry Nash really put the icing on the cake to take their tally to a whopping 40 points for the day. Cork tried to salvage something, scoring a goal after a long-range Horgan free, but it was too little too late


popular
Portumna prodigy streaks to eight shot Irish Boys win with bogey free round
"No doubt he'll say he played shit like he normally does, but I thought it was a good game."
The SportsJOE 12 o'clock quiz | Day 144
The SportsJOE 12 o'clock quiz | Day 143
Three teams Leinster can pit against each other to prepare for Munster
SportsJOE 2000s Football Quiz | Round 12
Brooks Koepka puts PGA Championship leaders on notice with final round comments

You may also like
4 months ago
The best sporting challenges to use time off to our advantage
5 months ago
Cork GAA will have fight on its hands to hang onto top prospect
6 months ago
"You grow as a person off the back of injuries...I always had the answer that drove me"
6 months ago
Cork finish with a flurry to stride away from improving Tipp
6 months ago
Cork have found themselves a fine full back
3 weeks ago
The SportsJOE 12 o'clock quiz | Day 121
Next Page