It's going to be some day of sport in Dublin.

Easter Sunday in Dublin this year is set to be gripped by sporting fever with two massive events happening in the north and south of the city.

Leinster will face Saracens at the Aviva Stadium in the European Champions Cup quarter-final. Leo Cullen's side's reward for emerging from the pool stages unbeaten is a date with the defending champions. The match will kick-off at 3.30pm. 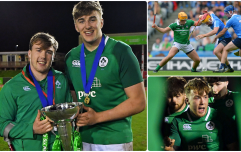 END_OF_DOCUMENT_TOKEN_TO_BE_REPLACED

But that's not all as the National Football League Division One and Division Two finals will take place on the same day (April 1st), with the thousands of GAA fans expected to travel north of the Liffey and pack into Croke Park for one of the most eagerly-anticipated afternoons in the football calendar.

Going to be some weekend https://t.co/ni5LwehnAa

No time has been set for the finals at Croker but the Division One showpiece is largely expected to fall around a similar time to the Leinster game as throw-in between Dublin and Kerry in 2017 was 4pm.

If you lean more towards rugby than GAA then you'll be more than happy with the line-up on Easter weekend. Just look at it!


popular
Solskjaer gamble on Harry Maguire backfires in most horrendous way
WATCH: Munster fans in Paris pay tribute to Anthony Foley with spine-tingling Fields of Athenry rendition
José Mourinho swaps Conor McGregor a Roma jersey for some whiskey
GAA at its best as Bellaghy players run into team-mate who buried his father that morning
"I'll go back running the roads now and make sure my body doesn't get lazy"
Alex Ferguson wrote Mickey Harte a letter - ex Tyrone boss reveals in new memoir
Jeff Stelling loses it during Soccer Saturday after Brighton was denied a blatant penalty

You may also like
3 days ago
The Leinster and Munster tries that should have both sets of fans excited
3 days ago
Will Connors on what it's like to play under Johnny Sexton's fiery leadership
2 weeks ago
Garry Ringrose raves about four young Leinster stars to watch this season
4 weeks ago
'Brian was a genius... he would've killed you to even win a game of touch'
1 month ago
Shocking footage of women's interpro changing facilities proves talk and hashtags are cheap
1 month ago
"If I had something to say to someone, I'd just say it to their face" - Johnny Sexton on Cooney claims
Next Page