Another All Star awaits, but he deserves so much more.

Lee Keegan certainly left it all out there in another All-Ireland final. Still, it was not enough for that elusive medal.

On Saturday, at Croke Park, Keegan was the one Mayo player that kept driving on and refusing to throw in the towel. He briefly found an ally in Padraig O'Hora but James Horan strangely decided to sub him with 20 minutes to play.

END_OF_DOCUMENT_TOKEN_TO_BE_REPLACED

The latest Mayo loss in an All-Ireland decider was their seventh in 15 years. It was Keegan's sixth during his time with the senior squad. While they pushed Dublin close on a couple of occasions during their winning stretch, the manner of their defeat to Tyrone has some fearing they may have missed the boat.

In the latest episode of The GAA Hour [LISTEN from 1:01:30], host Colm Parkinson discussed the final's top performers with guests Alan Brogan and Colm Cavanagh. They also debated whether Keegan could yet win a Sam Maguire. 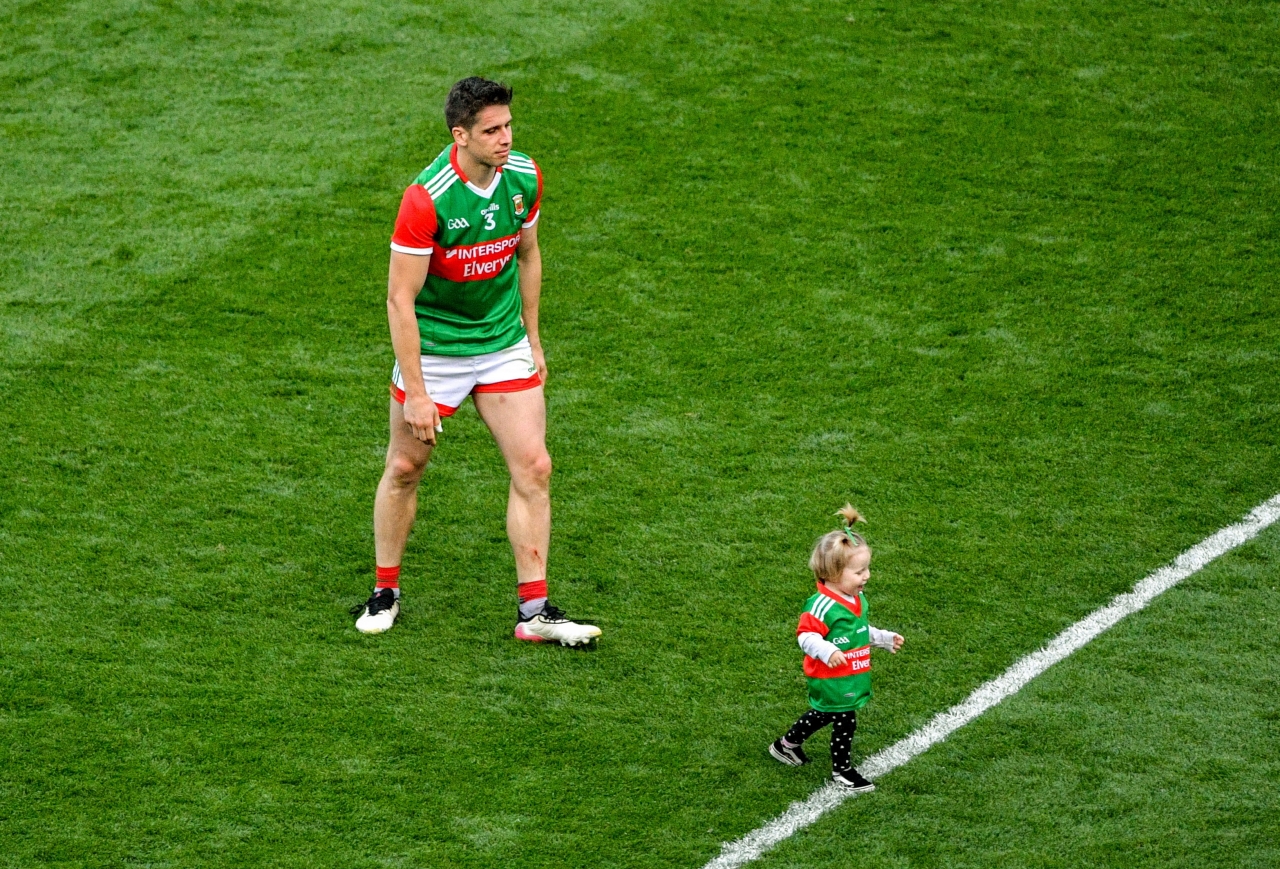 Lee Keegan with his daughter Líle after the All-Ireland Senior Championship Final between Mayo and Tyrone at Croke Park. (Photo by Daire Brennan/Sportsfile)

In discussing the leading 'Performance of the Week' candidates, there were plenty of Tyrone names put forward but Parkinson offered up Lee Keegan as the sole Mayo nominee.

"He is a warrior. Again, did most of his good work going forward and driving Mayo on, and that's what he's good at. He kicked an incredible point.

"He is probably one of the only ones from Mayo that could hold their heads up high. He never lets Mayo down on the big day, Lee Keegan."

Alan Brogan described Keegan as "exceptional" and said he answered any doubts, including some held by him, that he may have been on the wane. "He's moved around to put out fires," Brogan added, "and still expected to play his offensive game. He got a great score soon after Darren McCurry's goal, with the outside of his foot. He has that in his locker."

END_OF_DOCUMENT_TOKEN_TO_BE_REPLACED

"He never lets Mayo down," Brogan declared. "He's obviously hurting now, but he can be very proud of his performance again."

Commenting on the post-match pictures of Keegan and Tyrone's Peter Harte with their children out on the Croke Park pitch, Parkinson said:

"He's a warrior. He's one that you would always feel sympathy for. Jesus, the man deserves an All-Ireland medal, but it doesn't look like he's going to get one now."

Keegan will turn 32 in October and Mayo fans will be hoping he puts himself through another tough winter or two before he eventually steps off the inter-county stage.

Cillian O'Connor will hopefully return as good as ever for 2022 and Mayo will tell themselves that the younger players in the panel will be ready to go another step further.

One would be foolish to write off Mayo next year, especially with Lee Keegan in form, but it does feel like that window of opportunity is steadily closing.


popular
Gearoid Hegarty's harsh red card leads to a heated debate in The Sunday Game studio
French media rave about Caelan Doris and 'Playstation rugby' from Leinster
Liverpool and Chelsea fans go viral after bizarre FA Cup final confrontation
Tailteann Cup draw doesn't pass without controversy as repeat-pairings and regional draws come under scrutiny
Chelsea team-mates 'shocked' as Andreas Christensen reportedly refused to play in FA Cup final
Austin Gleeson sent off as Seamus Harnedy stands up again with an absolute stormer
Phil Bardsley in heated tunnel exchange after controversial penalty
You may also like
1 month ago
Orla O'Dywer becomes first Irish female to win AFLW All-Star as Staunton somehow misses out
1 month ago
After all the mouthing, O'Hora admits defeat and pays his respects to outrageous Clifford
1 month ago
Allianz League final media event cancelled because of GPA protest
1 month ago
Reception for Keith Higgins and Hurling for Hope crew in Ballyhaunis will make you proud to be part of the GAA
1 month ago
"I'd be a big fan of Aidan O'Shea but I don't think the style of football Mayo have suits him"
1 month ago
"Second half was much better from Mayo" says McStay even though they scored one point in last 25 minutes
Next Page