Laois player wrote out 14 targets for year in October, met 10 by July

It's a long year for a GAA player but Laois footballer Gary Walsh thought of a good way to keep himself on the straight and narrow.

His year began in November but he was already planning in October. The Ballylinan club man had a decent year for Laois in 2017 but he was adamant to make 2018 a better one.

Rather than going through the motions stumbling from one tough winter training session to the next, the sharpshooting forward listed out 14 targets on his phone that he was determined to meet in a chronological order.

Not all to do with his football career, many of Walsh's targets were based around his own day-to-day lifestyle, and his project offers a fascinating insight into the mindset of an inter-county player.

It just goes to show that a player's personal preparation outside of training is really what makes all the difference.

Here were his goals, with those he met marked with a tick, and those unfulfilled an x. He didn't do too badly. 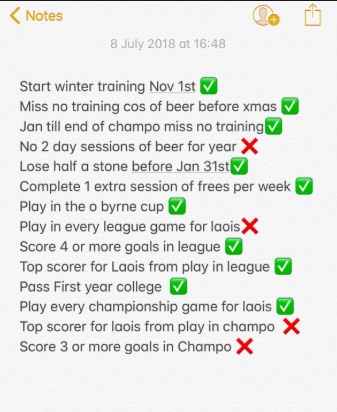 They say all goals should be specific, measurable, agreed, realistic and timed. In fairness to Walsh, the majority of his aims comply.

We took a quick look at each target individually and assessed how each club player in the country can relate to them.

It's time for the hard yards. Hit that gym and hit it hard. Ensure you've a proper programme and balance it with some running training. This is the slog, this will be worth it. 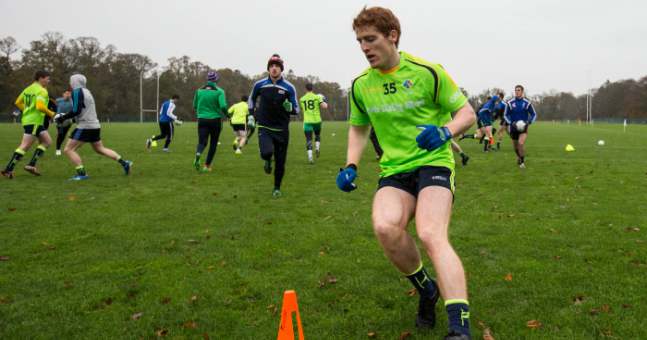 2 Miss no training because of beer before Christmas...Check

Between November and December is one of the few times that players actually have the chance to go out and enjoy themselves without worriying about drinking bans or the like.

Enjoy yourself, but not too much. Managers shouldn't mind you going on the beer, so long as you don't let it affect you in training.

3 Jan till end of champo, miss no training...Check 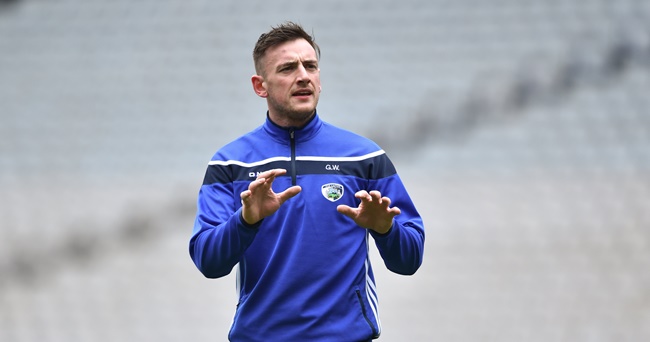 4 No two day sessions of beer for the year...X

One day of beer is bad, the rollover sessions are ugly.

Mix the hard training with a balance diet, you won't go too far wrong. Some players may be trying to gain weight, the principles are the same.

6 Complete one extra session of frees per week...Check

"Champions are made when there's nobody watching."

Trainers always say that it's the work players put in themselves that makes the difference. It makes sense really.

Hit the ground running early. A good pre-season is key to a good season.

8 Play in every League game for Laois...X

"Aim high and you won't shoot your foot off."

10 Top scorer for Laois from play in League

Individual goals are crucial. Gary Walsh was the League's oveall top scorer out of all divisions.

A healthy mind is a healthy body.

12 Play every championship game for Laois...Check

If you're not in you can't win.

13 Top scorer for Laois from play in Champo...X

Walsh's League goals were the same as his championship ones but there's no denying that he made progress this year.

He didn't achieve this one, but if he stays away from those 'two day sessions' next year who knows where it might take him?

popular
You'll have to be a diehard fan to get 20/20 in this Liverpool players of the 90s quiz
Wayne Rooney story about Memphis Depay shows why he failed at Manchester United
QUIZ: You have 30 seconds to answer this one tricky football question
The SportsJOE 12 o'clock quiz | Day 288
SportsJOE 2000s Football Quiz | Round 11
In defeat, Jerry Kelly dies with his boots on in coming of age final display
Lady Gaga will perform Satanic ritual during Super Bowl halftime show, according to conspiracy theorist
You may also like
1 year ago
James Doyle lights up club season with one of the great injury time cameos
1 year ago
"It was a great two weeks, just to get a bit of retribution on Camross for last year..."
1 year ago
Scenes of poetic justice for Ross King as last minute screamer wins it 365 days on
1 year ago
The ultimate, defining quiz of the 2019 hurling championship
1 year ago
"No-one in that group is going to take us for granted" - Laois aiming for more in 2020
4 weeks ago
"Outstanding refereeing" - courageous ref praised after under-20 final
Next Page