"It was my instinct and my intent to go at the game as soon as it started..."

Ciaran Kilkenny was happy with his performance in the drawn game. But there was more to give.

He'd set up scores, yes. He'd dictated the pace of the game too. But the Castleknock man is a forward. One of the best and most complete forwards. Often times, this versatility takes him to this selfless quarter back role of which he is the master.

But as Peter Keane once said of David Clifford, 'If you've a Merc, do you keep it in the garage?'

Kilkenny has shown time and time again that he can destroy any defender brave enough to come toe to toe with him. Remember the wreck he caused as a full forward in the 2018 League.

Jim Gavin saw the light. So with Kerry having put it up to Dublin first time out, the Dublin manager decided it was time to release his sharpest weapon.

"As soon as I got the first ball, I had in my mind that I was going for it. It was a mindset switch because in the game previous, my whole mindset was just to get the man in the best position on the ball, because our forwards are playing so well this year," he said on Thursday's GAA Hour Show in an interview with Conan Doherty.

Ciaran Kilkenny talks about the meeting he had with Jim Gavin, Jason Sherlock and Declan D’Arcy that shifted his mindset for the replay 👌

"This time, I was being aggressive and intentful - but either getting a shot or a free and then maybe pass it off. The first day - I was happy with my performance, I got a lot of assists but I had no shots and at the end of the day, I am a forward. It was my intent to put him on the back foot..."

END_OF_DOCUMENT_TOKEN_TO_BE_REPLACED

Put him on the back foot he did. Gavin Crowley was one of Kerry's best performers first time out. Here, he was reduced to the periphery.

Amazing that Kilkenny can just decide to clean out a player of Gavin Crowley's calibre for four points, but here's a greater insight into how he does it. Endurance.

"I'd back my endurance. I'm fortunate enough, I've a good endurance base. For me then - it's just about being fresh coming into a game. Making sure I'm spot on in terms or recovery. Doing just the right amount of training. I know if my legs are fresh, I'm in a really good place because I can run all day and perform in the game. I felt like that going into the last game, and even at the end of it running up the field, I felt like 'yes, I could play another game,' I felt that good..." 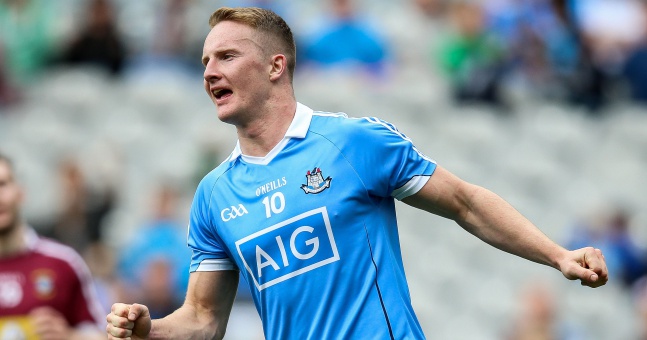 "I get great confidence when I'm fresh because I know I can run all day here and if I keep running and running...I know that it might be the 62nd minute or the 72nd minute, but I know I'll get away from him at some stage. I'd back my running ability there..."

It's hard to keep up with the man who doesn't stop.

END_OF_DOCUMENT_TOKEN_TO_BE_REPLACED

In a very open and wide-raning interview, Kilkenny talked about his time at Dóchas Éireann St Pat's Drumcondra. Huge for him were the sessions he used take with the various teams during his recovery from a cruciate injury.

"I loved coaching, it's a similar buzz to playing. And when I did my cruciate, it was a great filler for me. I coached the ladies team, the hurling team and the men's football team. For me, that year that I did do that, it allows you to think about the game a bit more - you learn about players and where you want them to go, spatial awareness and that. I felt that helped my game big time..."

27 next year, Kilkenny is only getting hungrier.

"For me next year, I'm looking at what what I can do to tick every single box so that at the end of the year, I'm happy that I gave it my best shot. It could be one year - I want to do a little MMA because it can help me get away from a player a little bit more. Not in an aggressive way, but little flicks here and there.

"Another year, it might be power so I'm going to do more explosive olympic lifting."

You can watch the Kilkenny and the rest of The GAA Hour show here.


popular
Roy Keane on the experience of being managed by Jack Charlton at USA 94
Dublin club Man O'War suspends all training and matches after positive Covid-19 test
Max Holloway's class gesture after controversial UFC 251 loss transcends the sport
"Ah Jesus Brian why didn't you tell me?" - the GAA's youngest Millennium Men
"Never back against the Irish" - How the BBC covered our USA 94 win over Italy
Jack Charlton's role in getting Roy Keane to Manchester United has been revealed
The SportsJOE 12 o'clock quiz | Jack Charlton special (Day 112)

You may also like
1 month ago
Seven-time All-Star Goldrick using time off to strengthen and improve
3 months ago
"Sometimes sport can overwhelm you, it was time for him to take a deep breath"
3 months ago
Dublin hurler Mick Carton back on the mend after winning another battle
3 months ago
"I'd spent hours and hours honing my left foot with my dad when we were young"
3 months ago
April club month a goner as virus threat causes longer delays
4 months ago
"That's not just handbags, there is a lot of really serious punches being thrown"
Next Page