Kilkenny youngster pulls off the no-look hand-pass once more

The Kilkenny youngster lets loose, he shakes up the wrists and then he starts spinning rocks like DJ Carey in his pomp. Eoin Larkin likes what he sees.

The eight-time All-Ireland winner with Kilkenny is a straight talker, who doesn't suffer dossing hurlers gladly and a scan of his autobiography Camouflage tells you that much. It also tell you that Larkin is a huge fan of his young club-mate, 18-year-old Cian Kenny.

Larkin's passion for The Village is still burning brightly as it was in 2005, when he guided James Stephens to their third ever All-Ireland club title and while they haven't made it back to the promised land since, much of Larkin's hopes for the future of his club revolve around the precariously talented youngster, hurling's newest freestyler Cian Kenny.

The 2019 club season was the first time Larkin played alongside Kenny and the veteran felt good vibes off the young cub. While the skills and flair are almost a given in a Kilkenny minor and a St Kieran's College star, what really appealed to Larkin was Kenny's confidence and his competitiveness. 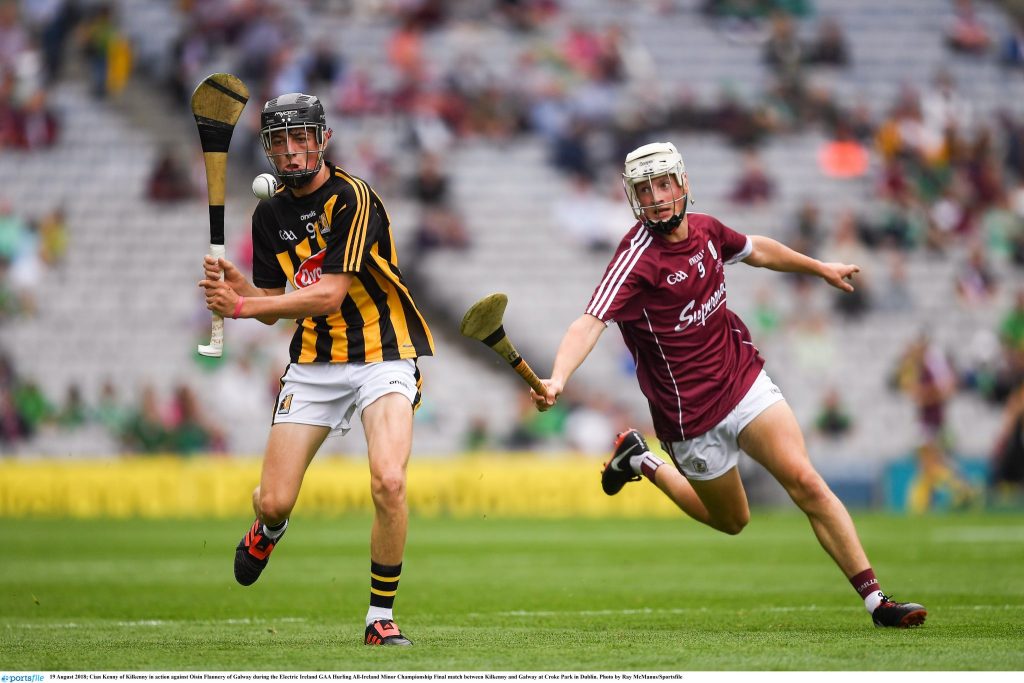 A story from last year's Kilkenny club championship was told, when Kenny revelled in his man-marking duties on TJ Reid, and even gave the Ballyhale star a bit of lip for good measure.

Young and inexperienced, Kenny settled in well and was right at home in the Kilkenny senior championship in his first year up. He showed well in the final, scoring a brilliant long-rang point from play and left Kilkenny and James Stephen's fans alike in no doubt that he will play a big part in the years to come.

For now, it's all about St Kieran's College - a rite of passage for many young Kilkenny hurlers - and though the famed hurling nursery lost their Leinster schools senior hurling final to Coláiste Eoin last Sunday afternoon, Kenny showed all that is good about the school that lets its students bring their hurls in and puck to their hearts' content at lunch-time.

It was the half forward Kenny who showed off this familiarity and sharpness best on Sunday, when he pulled off a brilliant no-look handpass to set-up teammate Denis Walsh for the point of the day. To make it even better, the youngster did this with his left and non-catching hand.

Kenny wheeled away with the finger wagging as if it was his own score, hard to blame him.

The Kilkenny youngster isn't a fan of the orthodox hand pass.

This was no flash in the pan though as Kenny showed in the Kilkenny colours in 2018 in a minor game for Kilkenny against Tipperary.

He's even feigned a dummy hand-pass before too, when playing in the Leinster semi-final for his school this year.

A little bit of slow mo magic from clubman Cian Kenny for @KieransCollege last weekend in a Leinster semi final🐐 best of luck to Cian and Eoin Guilfoyle and all the panel as they prepare for the Leinster Final next week👍🏻 pic.twitter.com/LRGvguKrjb

That's some collection of hand-passes, that's some amount of defenders beaten, that's when the practice pays off.