The GAA's best rags to riches story has come to a heartfelt ending after Kieran Donaghy announced his retirement from inter-county football. 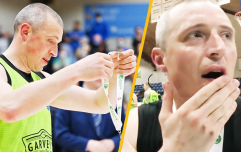 END_OF_DOCUMENT_TOKEN_TO_BE_REPLACED

After emerging through The Underdogs series in 2004, Donaghy won the hearts of the nation with his traditional style, his high fielding, his bullishness and his personality. Soon, he'd change the fortunes of Kerry football and help inspire the county to success in 2006, 2007, 2009 and once more in 2014.

In his retirement statement, the Austin Stacks legend penned a poem called Kerry I Thank You and, in it, he relived the dreams of a young boy who was inspired standing in Croke Park watching The Kingdom play.

In a long line of clinker lines from a long and distinguished career, Donaghy's poem summed up his greatness brilliantly and two lines in particular encapsulated the inner workings of the big man.

I played on the edge, not a backward step taken,

Will I ever apologise? You must be mistaken.

A little poem for ye. Thanks for everything @Kerry_Official pic.twitter.com/WIxl985gkL 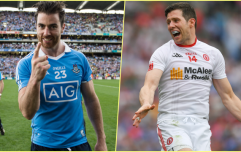 "He was told he would be going up against Sean Cavanagh, and he said: 'Who?'"

END_OF_DOCUMENT_TOKEN_TO_BE_REPLACED

Donaghy's appearance in The GAA Hour studio this month was a memorable one as he reflected on his career and looked to what is ahead for Kerry.

Whilst he might not always have been loved by every rival, he goes out with the respect of Gaels all over the island. He leaves as he came in, a winner. And a Kerryman to the core.


popular
Damien Comer targeted in brutal, chaotic Armagh and Galway brawl
Roy Keane makes good on bet after seeing Cork fall to Dublin
Shane McGuigan does a 'Sueey' Cristiano Ronaldo would be proud of after winning MOTM
Conor Gleeson's gesture to heartbroken Ethan Rafferty a tonic after sideline brawl
Liverpool set £60m Mo Salah price as contract talks continue
"I have decided to stay in Ireland" - Oisin Mullin gives Mayo fans the news they have been praying for
Malcolm Ebiowei 'ignored Erik ten Hag text' before signing for Crystal Palace
You may also like
6 months ago
Kieran Donaghy vs Tommy Walsh - The 'Twin Towers' reunite this weekend
7 months ago
Kieran Donaghy kicks the winning penalty that sends Austin Stacks into Kerry final
7 months ago
Kieran Donaghy set to break 30-year-old club record this weekend
8 months ago
It's often forgotten that Tommy Walsh began his career with the same stardom and promise as David Clifford
9 months ago
"What Tyrone winning brings is hope" - Jim McGuinness and Kieran Donaghy believe the GAA landscape has changed
1 year ago
Kieran Donaghy reveals what it's like to work with "very direct" Kieran McGeeney at Armagh
Next Page