Kieran Donaghy has once again sought to play down the incident in last month's All-Ireland final that will see Philly McMahon miss the opening game of the league next year.

Dublin decided not to contest a charge by the GAA that will see the corner-back serve a one-match ban for an alleged eye-gouge of the Kerry full-forward in last month's three point win over the Kingdom in Croke Park.

McMahon denied that he had eye-gouged the Austin Stacks man, while Donaghy felt the incident needed to be left on the field after the defeat, and did not want to be drawn too heavily on any possible punishment for the Ballymun man. 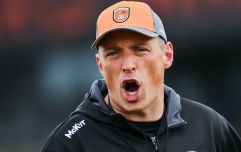 END_OF_DOCUMENT_TOKEN_TO_BE_REPLACED

There was much concern afterwards as to how close Donaghy may have been to a serious injury from McMahon's finger, but speaking on Radio Kerry's Terrace Talk last night the former Football of the year told host Weeshe Fogarty that any fear of injury for him was wide of the mark.

"No, it was nothing close to serious eye damage. An incident like that could be serious if it happened to someone at a different time but for me it was nothing that I was going to have anything serious or long-term out of."


popular
Shane Lowry on his Tuesday duels with Rory McIlroy at The Bear's Club
QUIZ: Can you name the sponsors of all 32 of these old county jerseys?
Roy Keane linked with Championship job to replace ex-teammate
Predicting the 31 biggest knock-out championship games around Ireland this weekend
Two Man United players led a furious half-time inquest into Manchester derby performance
"This is the darkest day for English rugby... the ship has sunk" - End of the road for Worcester Warriors
"I think Wexford football is in trouble if something is not changed" - Banville criticises Wexford lay-out
You may also like
8 months ago
"He was told he would be going up against Sean Cavanagh, and he said: 'Who?'"
8 months ago
The best nicknames in the GAA as chosen by you
10 months ago
Kieran Donaghy vs Tommy Walsh - The 'Twin Towers' reunite this weekend
10 months ago
Kieran Donaghy kicks the winning penalty that sends Austin Stacks into Kerry final
11 months ago
Kieran Donaghy set to break 30-year-old club record this weekend
11 months ago
It's often forgotten that Tommy Walsh began his career with the same stardom and promise as David Clifford
Next Page