Kieran Donaghy: It can't be neutral when Dublin are playing in Croke Park

Former Kerry forward Kieran Donaghy has said that the Croke Park games for the Super 8's should be brought around the country and not just played at headquarters.

The GAA announced last year that each team would play one game at home, one game away and one game at Croke Park if they advanced to the All-Ireland quarter-final stage, however, with Dublin using Croke Park as their home ground too, it essentially gives Jim Gavin's side two home games to the one game enjoyed by all the other competing counties.

It's been a point of contention in intercounty football with Donegal manager Declan Bonner labeling it as an “unfair advantage” and Donaghy added on Sky Sports on Saturday that Croke Park could not be considered a neutral venue for the Jacks.

"I've played up there enough times in full houses and great atmospheres and it's a joy to play in but when it's not full, it's just ghostly, it's eerie and you can't get atmosphere," Donaghy told Sky Sports.

"If it rains the ground gets super slick and it makes it a harder occasion to play in but it's just how dead the crowd is is clearly evident. I have no problem with Dublin playing their neutral games in Croke Park, I have a problem with all teams going to Croke Park.

"These games should be taken around the country; bring them to places which might not get too much for their economy at this time of year. Give them a huge day out. Dublin love to travel. They don't that opportunity much but when they do, they love to travel. They bring a huge atmosphere.

"If you had a Mayo and Dublin in a neutral venue and you brought it to a Semple Stadium, you'd have something similar to Kerry and Dublin [2001 All-Ireland quarter-final]. They're still talking about that game. Why? Because there was an atmosphere and two teams lived up to it.

"It was like Kerry in 2014 in the Gaelic Grounds against Mayo. Teams will go to that neutral venue. They'll pack it out and you'll have a cracking atmosphere. That's what the neutral venue is about; it can't be neutral when Dublin are playing in Croke Park."

Should round two of the Super 8s be moved out of Croke Park?🤔@Starryboy14, @SenanConnell and Peter Canavan debate whether neutral games should be brought to provincial grounds📽️👇 pic.twitter.com/ByrXcuggcL 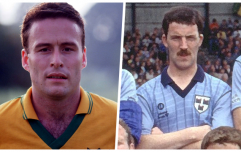 "We did find him hours later and we made up." - How Flynn and his best friend came to blows in Croke Park

END_OF_DOCUMENT_TOKEN_TO_BE_REPLACED

Donaghy added that headquarters should be kept for Dublin's home games and semi-finals and finals. A move away from the Croke Park round to neutral venues across the county could potentially freeze out some fans but Donaghy insists that fans that really want to go will find a way.

"We're very precious about that in the GAA. Tickets will go up. We queue for concerts, people lie out in the street for three weeks before big concerts if they want that ticket. That's what people used to do.

"If you want a ticket to go to a neutral [venue] game, and you want to see your team bad enough, you will find a way to get a ticket.

"We always err on the side of caution by bringing it to the huge places. We had Cork and Laois last week playing in Semple Stadium, a beautiful stadium. That's the wrong place to bring that game. Bring that game to a 10,000 [capacity venue] where you get 5,000 from Cork and 5,000 from Laois, pack the place out with a great game with a great atmosphere.

"There just has to be a bit more thought by the CCCC when they are picking venues for these games. Last year the first round of games was the neutral games in Croke Park. That was a horror show.

"Now they've put it for the second round. The tweak they have to make for next year is that Super 8 games will be at a neutral [provincial] venue and it keeps Croke Park special for All-Ireland semi-finals."


popular
In 86 seconds, Patrick Bamford becomes English football's voice of reason
'Make him hurt, make him yours' - How the Springboks ruled the world
Springboks legend Tendai Mtawawira tells us what he really thinks of Ellis Genge
Jose Mourinho is the picture of happiness and health after Spurs sacking
'Beast' Mtawawira is a big fan of Mike Ross' Lions front row
"We did find him hours later and we made up." - How Flynn and his best friend came to blows in Croke Park
Jose Mourinho is about to step up and become the hero football needs
You may also like
1 year ago
Jim Gavin steps down as Dublin manager
1 year ago
Five key players which helped Dublin secure their historic Five-In-A Row
1 year ago
Assault, the GAA's Saipan and two winning teams – the first All-Ireland Final replay
1 year ago
QUIZ: Can you guess which club each Dublin player plays for?
1 year ago
Pillar, Gilroy and the culture change that shaped Dublin
1 year ago
How David Clifford has compared to Con O'Callaghan this year
Next Page