A dog's dinner, and no mistake.

On Monday, Dingle were coming to terms with the fact that their season had been ended by committee.

The Kerry SFC final draw, and a fixture glut, meant that Killarney Legion would progress to the Munster semi-final against Cork's Nemo Rangers. Legion drew with South Kerry but a win for the latter would have seen Dingle represent the county in Munster's last four.

Kerry forward Paul Geaney would have missed out on the semi-final, with Dingle, regardless as he is recovering from a back injury.

Still, that did not prevent him from highlighting the anarchy that will see Legion represent the county having not yet won a county final [the replay against South Kerry is slated for later this month].

Last night, Geaney tweeted out pictures from Sunday's match programme. The front cover states that extra time will take place if there is a draw.

However, the inside pages state that extra time does not apply if there is a draw in the senior match. The programme notes that a senior final replay would take place on Saturday, November 14. 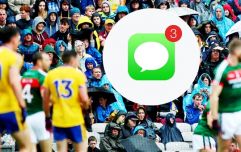 END_OF_DOCUMENT_TOKEN_TO_BE_REPLACED

Crossed wires or a rogue programme printer? It merely adds to the confusion, and Dingle's sense of injustice.

“The whole system is just wrong in the county,” Dingle manager Paul Fitzmaurice told Radio Kerry. “And in this fiasco I’m afraid the county board have been shown up.

“It’s very frustrating. They can blame the Munster final replay [between Cork and Kerry] and everything, but there’s been several free weekends this season where games could have been played.”

No extra time but this one could run and run.


popular
In 86 seconds, Patrick Bamford becomes English football's voice of reason
'Make him hurt, make him yours' - How the Springboks ruled the world
Springboks legend Tendai Mtawawira tells us what he really thinks of Ellis Genge
Jose Mourinho is the picture of happiness and health after Spurs sacking
'Beast' Mtawawira is a big fan of Mike Ross' Lions front row
"We did find him hours later and we made up." - How Flynn and his best friend came to blows in Croke Park
Jose Mourinho is about to step up and become the hero football needs
You may also like
2 years ago
David Pocock shares class post-match dressing room picture with Conor Murray
3 years ago
Ian Madigan brilliantly shuts down Twitter user who was complaining about female referees
3 years ago
Sean O'Brien plays very funny prank on shop assistant in Kilkenny
3 years ago
Home and Away's Alf Stewart sends brilliant response to Cork City's league win
3 years ago
Sean O'Brien not impressed with Kearney brothers being referred to as 'famous farm boys'
3 years ago
WATCH: Andy Gray, bless him, got himself a bit muddled while talking about Tony Blair
Next Page