A pulsating game played out in pretty slick conditions at Iniskeen this afternoon.

David Clifford came off the Kerry bench to inspire a second half rally but it was Conor McManus that settled matters for Monaghan in their Allianz Football League encounter.

Clifford was a surprise inclusion on the Kerry bench and he was sprung for the second half, showing no ill effects of the hamstring strain he picked up in the league win over Mayo.

END_OF_DOCUMENT_TOKEN_TO_BE_REPLACED

In the end, though McManus' scoring contribution of 1-3 was crucial to Monaghan.

Monaghan made six changes to the team they announced on Friday night, with Conor McManus coming in for UCD's Siegerson Cup star Conor McCarthy.

Malachy O'Rourke's men made most of the early running but were left ruing a number of poor wides in scoring positions. McManus did get them some order of reward for their early dominance with a well dispatched penalty.

With that penalty, a McManus point, Jack McCarron contributing three points and five other Monagan men chipping in with scores, they led by six points at the break - 1-9 to 0-6.

Monaghan’s first score of the second half coming from this Conor McManus point. pic.twitter.com/xlJpcTIowh

The Kingdom went to work on reducing arrears. Clifford got a fine score from play and added a free soon after, and the lively Micheal Burns stepped up too.

David Clifford and direct football is the Kerry way...

Sean O'Shea was chipping in with frees and Barry John Keane fisted over a point after bursting through the Monaghan defence. 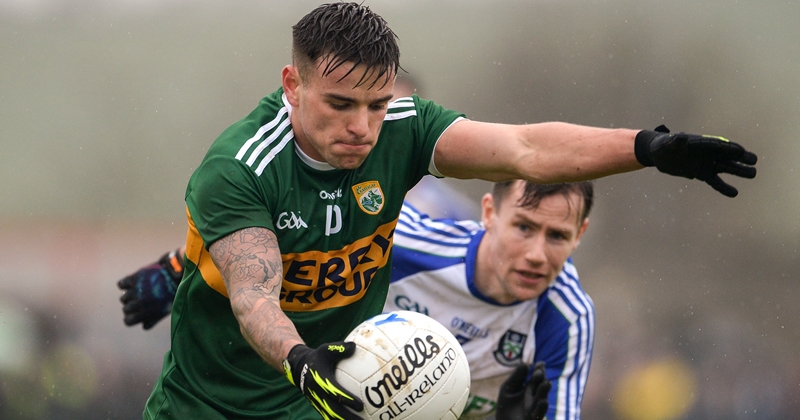 The hosts were then reduced to 14 men when Barry Kerr was shown a straight red card but a Neil McAdam score settled their nerves.

They were two points clear going into injury time before Clifford made it a one-point game with a well taken free. It was his third point of the half but it would be Kerry's last.

McManus, instead, was the last person to shift the scoreboard and it was in Monaghan's favour. He slotted over a late free to make it 1-13 to 0-14, securing his side's second win of the league campaign and handing Kerry their first loss.


popular
Clive Woodward happy to 'eat humble pie' after bold comments about Ireland
Man United could be blocked from playing in the Champions League next season
Man City expect Pep Guardiola to leave
"He rode him like a machine rather than a racehorse" - Mullins doesn't spare Townend as second string come good
The Ireland team Andy Farrell needs to start when France come to town
Josh van der Flier's post-match recovery routine could spark a bracing trend
Matt Williams wants two changes and Peter O'Mahony benched for Ireland vs. France
You may also like
3 weeks ago
QUIZ: How many of the 33 county SFC champions for 2022 can you name?
3 weeks ago
Eight more legends get the Laochra Gael treatment as new season launched
3 weeks ago
McCarthy and Clifford both lose the run of themselves in Hogan Stand speech
3 weeks ago
"I certainly won't be holding any grudges with them fellas and I hope they'll do the same." - Clifford shows class after late junior final drama
3 weeks ago
'They're not getting out of here until 10.30. Have to report for work tomorrow' - Kearns says integrity of O'Byrne Cup has been shot
4 weeks ago
'They'd be giving them a hand with squats, ideas and advice about kicking' - Rennie hauls Cliffords' grá for Fossa
Next Page