His time is now.

Eamon Fitzmaurice is not hanging around here.

Kerry begin their Allianz Football League campaign, on Sunday, in Fitzgerald Stadium and there are some fresh faces included in the starting team.

The headline news is our headline news - Minor sensation David Clifford is named in the full forward line. The Fossa clubman had a sensational 2017 as he helped The Kingdom's young guns to All-Ireland success. His scoring stats were scary: 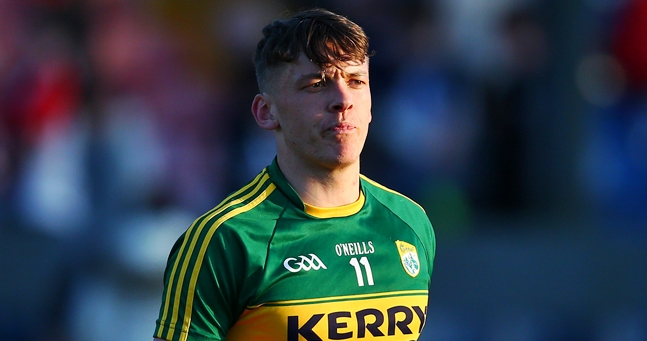 All the talk, in September and early October, was that the teenager could possibly be tempted to switch sporting codes and try his hand at Aussie Rules, Down Under. However, on Terrace Talk, Clifford blew such notions out of the water by joking, "My mother wouldn't let me go!"

Stirring words and, this evening, his reward has quickly arrived.

Clifford has been named in a forward line with All Star Paul Geaney and Barry John Keane. The Kerry team is captained by Dr Crokes goalkeeper Shane Murphy and contains Shane Enright, Jack Barry and Seán O Sé.

Needless to say, Kerry fans and experts are in raptures...

David Clifford startin against Donegal! Surely Donegal backs will give him some treatment like an awl fella to a young lad in junior B! #GAA

Throw-in for the league opener is 2pm on Sunday.

popular
How The Mountain lost 36kg ahead of boxing fight with The Beast
Sam Bennett's green jersey masterclass got Lance Armstrong talking
Irish cyclist Sam Bennett delivers classic putdown to British cycling magazine
"He's found a way to do it. Whether that's good or bad for the game, I don't know"
The SportsJOE 12 o'clock quiz | Sam Bennett special (Day 184)
Les Ferdinand explains why QPR didn't take the knee
QUIZ: Can you name every player to score four goals in a Premier League game?
You may also like
1 month ago
"Even on player's bad days, you were very kind" - Seán Óg sums up O Muircheartaigh's magic
3 months ago
"I don't think forwards like when you play that half a yard in front"
3 months ago
"He was a nightmare to play against...you were just a sitting duck"
4 months ago
Closed doors no issue for O'Brien
5 months ago
"I'd play 18 holes of Pitch n Putt" - Jack O'Shea's All-Ireland final prep pure class
6 months ago
St Patrick's day memories: Rural Caltra with one of the great underdog triumphs
Next Page