As a youngster, John Egan had it all.

Soccer, Gaelic football, hurling, golf. You name the sport and the kid from Cork with the famous Kerry father could turn his hand to it in an instant.

Ger McGreevy was his soccer coach with Greenwood FC and though Egan was one of the best young players he's ever seen on the football pitch, he was an even better hurler and gaelic footballer.

"He was unbelievable," says McGreevy.

Egan made the move over to England as a teenager but a couple of setbacks would hold him back. A broken leg and a change in managers hit hard, but there was no blow as devastating as the loss of his father - with whom he shared a special relationship - in April 2012.

The centre half took a while to recover from that, but through the support of his mother Mary and sister Máirín, and through his own drive and determination, Egan is playing the football of his life and he's dominating the Premier League with Sheffield United. 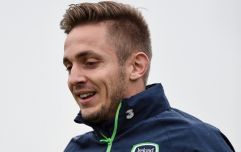 END_OF_DOCUMENT_TOKEN_TO_BE_REPLACED

Egan often wears the number 15 jersey - the same number his dad won five All-Irelands with Kerry in - as a tribute. He returns to Bishopstown GAA club at every chance he gets. He's still a GAA man at heart and he'll never forget his roots.

You may also like
1 week ago
QUIZ: Guess the footballer from their Wikipedia page | Irish edition
2 weeks ago
"I think he kissed the jersey" - Mick McCarthy opens up on Declan Rice
2 weeks ago
You'll need all your powers to get 20/20 in this 1990s Irish footballers quiz
1 month ago
Can you name Ireland's top Premier League scorers without making a mistake?
1 month ago
Ireland hopeful of November playoff date against Slovakia
1 month ago
Ireland set for dramatically new look as Stephen Kenny takes charge
Next Page