Joe Canning is completely revolutionising the science of the side-line cut.

Canning has always been known for his superb side-line cuts. He was one of the first hurlers to begin the trend of side-line cuts being seen as realistic scoring opportunities.

There is rarely a more attractive sight on a hurling field than a sliotar arrowing from the turf and over the bar after a mere flick of the wrists from a hurler. There had previously been calls from commentators and players alike for two points to be awarded for a successful side-line.

END_OF_DOCUMENT_TOKEN_TO_BE_REPLACED

Such calls haven’t been as prominent in the recent past as a result of a lack of reaction to them, but there is no denying the beauty of and the psychological lift that a successful side-line cut offers a team. Canning, of course, has cut many a beautiful line ball in his day.

It is fairly obvious, however, that the tactic of teams using their line balls as shots on goal comes with the risk of many cuts wastefully tailing off wide. This can be extremely demoralising for a team, when a free puck that could’ve been more productively used becomes a wasted opportunity.

It doesn’t matter whether you’re Canning, Austin Gleeson or TJ Reid, you can never guarantee that any given side-line will sail over the bar.

END_OF_DOCUMENT_TOKEN_TO_BE_REPLACED

After Canning saw his first side-line wastefully land in the hands of the gracious Tipperary Goalkeeper Darren Gleeson, The Portumna man opted on a change of tactics for any further line balls he stood over. Instead of attempting the ambitious shot on goal, he decided to look for the runs of his team-mates. The execution was absolutely spot on and seemed to catch Tipperary defenders off guard.

An example of one of these productive line ball’s came in the 57th minute of the game where Canning can here be seen putting the ball on a plate in front of David Burke (circled below), who was afforded plenty of space by Tipp defenders. 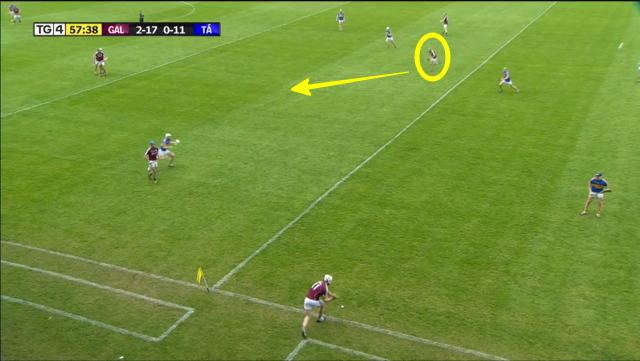 Burke gleefully catches the ball after a pitch perfect cut from Canning.

Burke turns and slings one over the bar to score a simply beautiful point. 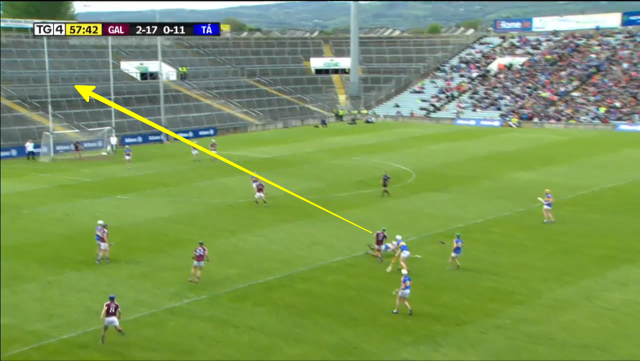 Speaking on The GAA Hour Hurling Show, Canning claimed it wasn’t a tactic that they had discussed [listen from 18:00 below]. He said:

“It wasn’t, no, no, it’s funny now, it’s hard to take side-lines on some pitches because there is no good grass on the side-lines and so you have to place it right beside the line.

"One or two didn’t go well for me at the start so you have to just try and take your initiative and try something different. Sometimes they work and sometimes they don’t, you know, but one or two of them seemed to work yesterday, it was always good that way you know.”

Presenter Colm Parkinson certainly felt that this was a move that the Micheal Donoghue’s charges had rehearsed on the training ground. Parkinson declared:

“He was just waiting for David Burke or for Coen’s run and just chipping it into their hand, and then they’d flick it back to him and over the bar. Joe said that they weren’t planned but I’m not sure I believe him.

"If they weren’t planned, I’d almost look when Joe was over the side-line ball like this was a [Stephen] Cluxton kickout, the movement was brilliant and then bang he got someone and then back to him in the pocket and it just made me wonder, in hurling, often side-line balls are just like pure lotteries, like there’s never any thought put into them…

"When Joe has them and he’s able to get them off the ground, It happened more than once for me to think like, this is working and if this isn’t a plan it should be a plan.”

JJ Delaney was in awe of the skill displayed by the Portumna man. The Kilkenny legend said, “You can’t underestimate how skillful that is.

"You wouldn’t have too many Joe Cannings to stand over a line ball to actually put it right into a lad’s hand."

TJ Reid is another who has mastered the art of the give and go type side-line cut. Just watch this delightful sample from the 2014 League-Final V Tipperary from 2'53".

Whether it was a conscious decision or a spontaneous occurrence, it worked absolute wonders for the men in maroon.

It may yet become a tactic that other teams will attempt to employ in the future.


popular
Sean Dyche set to be named Everton manager after Marcelo Bielsa talks break down
Roy Keane flatly rejects longstanding perception of ex-Man United midfielder Paul Ince
Allianz National Football League Round 1: All the action and talking points
Conor McGregor hit by car ‘at full speed’ while cycling
Roy Keane leaves ITV pundits in stitches after Pep Guardiola's pre-match interview
Quiz: Identify these 15 football clubs that are not named after a place
"I don't like to fill my time that way" - O'Hora going his own way in an era of obsessives and covering all bases
You may also like
1 week ago
The SportsJOE Friday Pub Quiz: Week 7
2 weeks ago
The best five-team accumulator special as the Premier League picks up steam
1 month ago
The five biggest talking points ahead of the Premier League's return
1 month ago
The five best bets for Aston Villa vs Liverpool on St Stephen's Day
1 month ago
The best St Stephen's Day special five-team accumulator as the Premier League returns
1 month ago
Five most memorable moments of the 2022 World Cup
Next Page