He'll only draw every last drop of saliva out of you until you're frothing and lying helplessly in wonder of what this man can do, nearly begging him to stop but, of course, you don't want him to.

Against Dublin, the Tribesmen's gem was at it again. He doesn't know any other mode - it's either magical stuff or it's either... he's just not playing.

END_OF_DOCUMENT_TOKEN_TO_BE_REPLACED

He produced another no-look hand pass to a runner going in the other direction of him again but this wasn't a behind-the-back piece of audacity, it was across his chest but straight onto the run of a team mate he could only see if his peripheral vision was 360.

His pass to Jason Flynn was on another level again though and it should've reaped a sure goal. Pure accuracy, pure, glorious weight, and such a delicious flight on the ball that it'd make your knees weak.

WATCH!
It was a Joe-show in O'Connor Park as Joe Canning inspired @Galway_GAA to a comfortable 2-28 to 1-17 win over @DubGAAOfficial today! pic.twitter.com/pqGBscc846

END_OF_DOCUMENT_TOKEN_TO_BE_REPLACED

The ball to Flynn was from the right wing and it absolutely fizzed over the heads of every defender in a darting straight line right into the path of his team mate who was at the other side of the backline and left with an angle at the goals such was the torpedo-like nature of the assist.

Flynn, however, blazed over.

This is where Canning was.

This is where Flynn was. 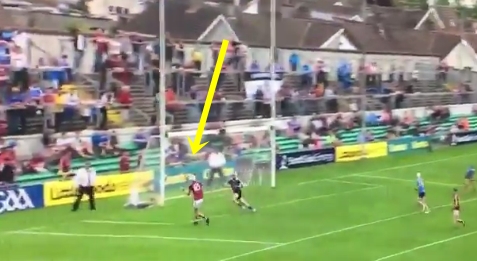 No room for error.

You can see it after 33 seconds below but it's not done justice. At all.

It won the hearts of everyone in Ireland too.

That ball from joe canning🔥

Joe Canning is a bad man. Can do things no one else can.

And he doesn't mind a selfie either.

Well would you look fans getting selfies with their hero Joe Canning. What do you think of that @bernardflynn15? #Sundaygame #GAA 💪 👌 pic.twitter.com/cHFE4z6FE6


popular
"He rode him like a machine rather than a racehorse" - Mullins doesn't spare Townend as second string come good
"Remember that name" - Sonny Bill Williams raves about Ireland U20 star after outrageous try assist
Matt Williams wants two changes and Peter O'Mahony benched for Ireland vs. France
Peter O'Mahony reaction to Liam Williams scuffle shows he may finally be mellowing
Ireland vs Wales: All the big talking points, moments and player ratings
Two changes as familiar faces return to our Ireland team to face France
"The truth is I've never actually worked a day in my life" - Russell bows out on his own terms
You may also like
3 weeks ago
Moran and Bradley and Cooke show that it's hard as ever to beat the big man in midfield
1 month ago
How many of the 65 county senior champions for 2022 can you name?
2 months ago
"I appreciate Moycullen now more than ever" - Cooke's American lifestyle from a Moycullen base
2 months ago
GAA JOE Team of the weekend
2 months ago
Results from all around the grounds on a blockbuster day of provincial action
2 months ago
GAA JOE Team of the weekend
Next Page