Joe Canning is some bit of stuff.

Galway are the National Hurling League champions for the first time since 2010 after they cut the best side in Ireland to tiny pieces on Sunday to claim the title.

In front of 16,089 people at the Gaelic Grounds in Limerick, the Tribesmen hurlers backed up their footballers' Division Two success to make it a double for the county in April as they ran over the top of lynchpins Tipperary with a relentless 3-21 to 0-14 win. 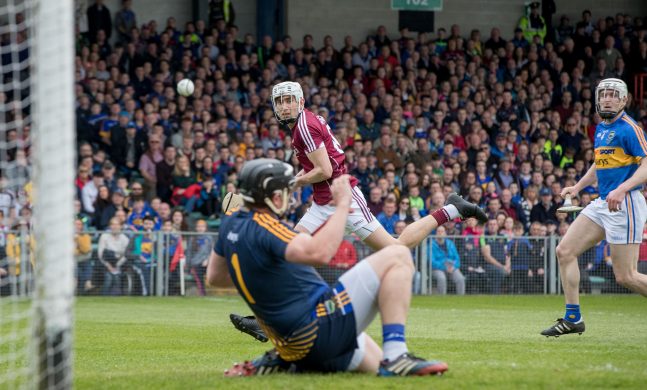 END_OF_DOCUMENT_TOKEN_TO_BE_REPLACED

In truth, the Premier county never really looked to be at the races. The All-Ireland champions have a hell of a start to their championship campaign with a Munster quarter-final against Cork in just four weeks time and, without their assassin Seamus Callanan leading the charge in the league decider, their minds looked elsewhere.

Joe Canning's mind wasn't though. In 61 minutes of action, the Galway superstar hit 0-9 and he did it from every angle, from every distance, and with the infamous blue and gold bearing down on him.

On one of the biggest days on the hurling calendar, Canning stepped up like he generally does and led from the front as the westerners shot the lights out of Tipp.

Naturally, the attacker took some of the usual plaudits.

But this win wasn't just about Joe Canning.

With the green flag being raised three times, Jason Flynn's spectacular double stole the headlines as he produced magic with his hurl to beat Darren Gleeson on two different occasions in the second half.

He was awarded man of the match by TG4.

Some goal that by Jason Flynn #gaabeo #gaa

Jason Flynn is some weapon out there today 🖒

He was winning ball all around the forward line and swinging over from all sorts of positions and stances.

The Tipp backline had no answer for his exploits and the fact that he wasn't awarded man of the match didn't sit well with some neutrals.

How did Conor Whelan not get man of the match? Outstanding from start to finish #gaabeo #AllianzLeaguesFinal #TIPPvGAL

Of course, you mention those three forwards and you're neglecting the other heroes of the day.

Men like Daithi Burke who wrapped up John McGrath all afternoon.

Men like David Burke and the outstanding Gearoid McInerney who manned the half back line as if they were protecting the princess' fortress.

It was a merciless display from Galway who dominated all over the park. It was a shit display from Tipperary. That was the difference. That's why there were 16 points between them in the end.


popular
"He rode him like a machine rather than a racehorse" - Mullins doesn't spare Townend as second string come good
"Remember that name" - Sonny Bill Williams raves about Ireland U20 star after outrageous try assist
Matt Williams wants two changes and Peter O'Mahony benched for Ireland vs. France
Peter O'Mahony reaction to Liam Williams scuffle shows he may finally be mellowing
Ireland vs Wales: All the big talking points, moments and player ratings
Two changes as familiar faces return to our Ireland team to face France
"The truth is I've never actually worked a day in my life" - Russell bows out on his own terms
You may also like
2 months ago
Leinster semi-final double-header confirmed after big day of provincial club action
3 months ago
All provincial first round fixtures confirmed as race for All-Ireland club hots up
3 months ago
GAA JOE Team of the weekend
3 months ago
GAA JOE Team of the weekend
3 months ago
Jerome Cahill lights up Tipperary final with two goals, one as good as the next
3 months ago
Predicting the 13 biggest knock-out games around the country this weekend
Next Page