Joe Brolly is Marmite - half of you want to smear him all over your toast, while the other half seemingly want to punch him in the face.

The 1993 All-Ireland winner, The Sunday Game pundit, barrister, organ donor and all-around raconteur was the special guest on SportsJOE Live on Wednesday night and he did not disappoint.

An evening with Joe Brolly... That was some entertaining TV #SportsJOElive pic.twitter.com/vkDuqlpmuO

END_OF_DOCUMENT_TOKEN_TO_BE_REPLACED

Bowing at the feet of All Blacks legend Zinzan Brooke, lying off in the sun with Colm O'Rourke, defending Diarmuid Connolly, suicidal Japanese tennis players, his feelings on Pat Spillane and the alleged inconsistency of his punditry... all were up for discussion during a rollicking show.

Seriously, look at his fellow panellist O'Gara's face... he did not know what to make of the loquacious Derryman. 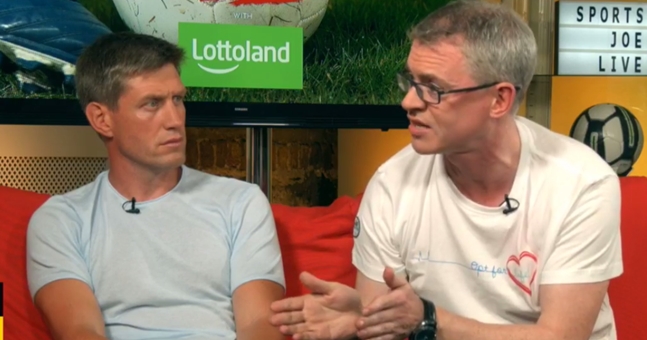 It goes without saying that Brolly's performance divided opinion.

Some were loving his heated debate with host Colm Parkinson.

Others just cannot warm to the divisive Derryman

But, love him or hate him, we cannot seem to stop talking about him. As a nation we are divided, with approximately 50 percent thinking Brolly is insufferable and the other 50 considering him a legend in his own lifetime.


popular
Sean Dyche set to be named Everton manager after Marcelo Bielsa talks break down
Roy Keane flatly rejects longstanding perception of ex-Man United midfielder Paul Ince
Allianz National Football League Round 1: All the action and talking points
Roy Keane leaves ITV pundits in stitches after Pep Guardiola's pre-match interview
Conor McGregor hit by car ‘at full speed’ while cycling
"I don't like to fill my time that way" - O'Hora going his own way in an era of obsessives and covering all bases
Quiz: Identify these 15 football clubs that are not named after a place