It's not often you see the Derry man stuck for words but he didn't have much to say to this.

Joe Brolly never claimed Colm Cooper was a bad player but the world doesn't care about that. He played down the goodbyes to the Kerry legend so, to the whole of Ireland at least, he thought the Gooch was shite.

What he actually said was a lot more considered but it wasn't talking about the Dr Crokes club man as the best player ever so perhaps it deserved some criticism.

"When someone like Colm Cooper retires we tend to lose the run ourselves," wrote in the Independent back in April.

"What is certain is that Colm was the ultimate purveyor of skill.

"He was like a computer animated footballer. Perfect balance. Perfect skills. Left foot, right foot. A perfect understanding of space and time.

"His goal finishing was without doubt the best I have seen.

"But, as I have often pointed out, he wasn't a leader in the mould of Peter Canavan or Trevor Giles or Colm O'Rourke. He didn't have that warrior spirit needed to turn games."

END_OF_DOCUMENT_TOKEN_TO_BE_REPLACED

So it wasn't exactly inconsistent of Brolly to use Cooper as an example of how to finish properly. Darragh O'Hanlon went through for Down in the first period of the Ulster final and pulled a glorious opportunity wide when it would've put the Mourne men in front.

The answer was simple - pass it into the net. Do a Gooch. Even Joe Brolly knows that. 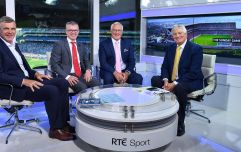 END_OF_DOCUMENT_TOKEN_TO_BE_REPLACED

Never one to let Joe Brolly get too far ahead of himself, Colm O'Rourke was there to keep the Derry native in check and he reminded him, Cooper and the entire nation of Brolly's comments on Gooch in the past and he might as well have sat back and lit a cigar whilst he was there.

You should've heard what he was saying about you earlier... pic.twitter.com/pUUwlHtdwY

Brolly laughed it off - said his words were taken out of context. Rather that or a pretty awkward few minutes for all concerned - except O'Roruke of course.


popular
Sean Dyche set to be named Everton manager after Marcelo Bielsa talks break down
Roy Keane flatly rejects longstanding perception of ex-Man United midfielder Paul Ince
Allianz National Football League Round 1: All the action and talking points
Conor McGregor hit by car ‘at full speed’ while cycling
Roy Keane leaves ITV pundits in stitches after Pep Guardiola's pre-match interview
Quiz: Identify these 15 football clubs that are not named after a place
Study shows rugby positions you are most/least likely to be injured playing
You may also like
2 months ago
'Soccer's Nelson Mandela' - Joe Brolly questions Roy Keane after World Cup comments
10 months ago
Joe Brolly reveals who he thinks is the best footballer "in Ireland at this moment"
1 year ago
Joe Brolly takes to social media to vent frustrations at GAA u17s rule
1 year ago
Joe Brolly reveals that God has revealed the outcome of the All-Ireland final to him in a dream
1 year ago
"The GAA ought to be ashamed" - Joe Brolly vents his frustration on Twitter
1 year ago
Joe Brolly comparison for Con O'Callaghan is bang-on, but Dublin star is still underappreciated by many
Next Page