15 points between them, 10 from play. It was a decent innings on Saturday for Mayo's much-loved duo.

Whatever you think of Cillian O'Connor and Andy Moran and whether or not they rank amongst the greatest in the game, it's impossible not to respect them - and not just the service and commitment they give their county, but the way in which they have developed their respective games to compete at the highest level.

You can talk all day about Mayo needing a forward - a Peter Canavan or someone like that, someone's bound to be lying around the county like. It's been said before and it will continue to be said for another few years and that surely annoys the hell out of stalwarts like O'Connor and Moran who are constantly leading the charge for one of the best teams in Ireland for so long. 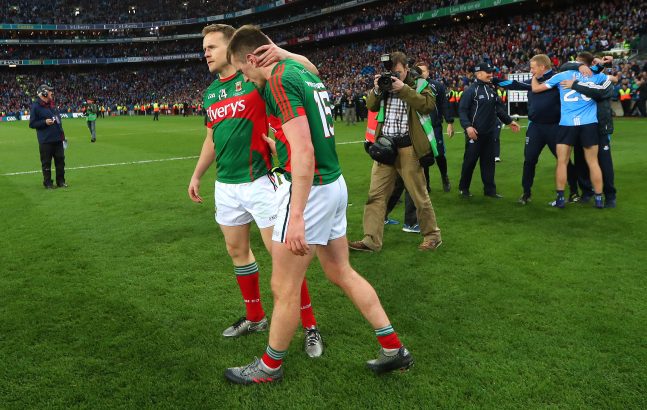 On Saturday against Cork at least, the pair turned it on again.

O'Connor buzzed around the Gaelic Grounds with sharpness and bite and every time either of them got a sight at the posts, it was dispatched mercilessly.

Mayo only missed five times during the first 70 minutes of that Round 4 clash - that's some turnaround from three games ago against Derry.

And, whilst they had the battering ram of Aidan O'Shea gaining yards for them time and time again and laying off for handy scores, it was the inter-play between Cillian O'Connor and Andy Moran that caught James Horan's eye once more - like it always does.

Speaking on The GAA Hour, the former county manager discussed the best facet of the two full forwards' play.

"Cillian can hold that pass off, he keeps the ball out on his left hand and waits for Andy to make that second run inside," Horan explained.

"You've seen that in every game, that delayed pass he has where Andy is faking his runs inside to come out to a place where Cillian knows he's going to kick it. You see them do that all the time, they have such a good understanding.

"They're two very, very clever players and they work very well together. And Aidan O'Shea is coming into that mix now as well where he's coming as a support runner if Andy is tied up inside.

"There is some very good integration play in the forward line that's getting better."

Listen to Horan's full thoughts below and how he thinks Cillian O'Connor and Andy Moran can cope with how Dublin mark them.


popular
Player ratings on a dismal day for Ireland in Twickenham
'If that was a cricket game, we could have declared at half-time' - Eddie Jones
ROG hits the nail on the head assessing Ireland's performance
Triple Crown wrenched away as England scrape Ireland off their boots
"Emotions will be charged" - Sean O'Brien backing Ireland for Triple Crown
QUIZ: How well can you remember this season's Premier League results so far?
Ireland lose mental battle, as scars of 2019 rear their head again.
You may also like
8 months ago
Mayo recall Moran, Clarke and Boyle for date with destiny
1 year ago
Cillian O'Connor's knee injury a cautionary tale for many GAA players
1 year ago
Cillian O'Connor hung around MacHale Park after defeat signing autographs
2 years ago
Cillian O'Connor may avoid lengthy ban due to far too lenient GAA rule
2 years ago
Cillian O'Connor could be set for a lengthy ban after reckless elbow
2 years ago
All hell breaks loose in Salthill as Galway lord it over Mayo again
Next Page