And you thought yoga was taking things to another level.

Strength and conditioning, video analysis, massages, psychology... we were running out of supplementary phases for clubs to copy really.

Well, now, there are sleep workshops. 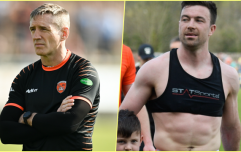 END_OF_DOCUMENT_TOKEN_TO_BE_REPLACED

Forget about your team bonding and your yoga and your running efficiency classes, Rugby Players Ireland have opened our eyes to a whole new world of shut eyes.

The RPI do some great work for the professional players of this country and now their Wellbeing Programme is so thorough that it even tackles sleeping problems.

Many IRUPA members struggle with sleep. As part of our Wellbeing Programme we run sleep workshops #ForThePlayers pic.twitter.com/wtsx5D6BbW

Interesting stuff, if you have the time to explore it.

The Connacht players certainly enjoyed testing out some of the best beds for resting their weary bones on during a recent wellbeing workshop that took place over at The Sportsground.

For our players to live well and perform, they need to sleep well first. Thanks to https://t.co/3FuB6Jkaft for their recent workshop! #wellbeing #sleepmatters #zzzzz pic.twitter.com/Y1T38knSuE

Expect the GAA to follow suit and make time to explore it. We love a good addition to the training programme in the GAA. So long as it doesn't involve any skills training of course.

19 clear signs your GAA team is in pre-season mode https://t.co/OsH4yeuA3r

Sleep workshops will be rolled out at a county near you any time soon. Who needs to kick a football?

Grand if you're a professional though. Keep it up, Rugby Players Ireland.


popular
Former England Under-21 captain open to playing for Ireland
The four stone-cold certainties for All-Stars even as early as this
Kylian Mbappe reportedly wants PSG to sell Neymar
Eamon McGee just couldn't help himself with Armagh-melee tweet
"He's actually smiling putting the ball over the bar. He should nearly be fainting." - Ryall on Limerick's legacy
Andy Farrell goes for Munster veterans as Ireland team to face New Zealand named
Gavin Coombes one of four Irish players to push themselves into Test picture
You may also like
4 months ago
England star George Furbank on biggest gym demon in the current squad
4 months ago
How The Occlusion Cuff can help build strength, endurance and recovery from injuries at a faster rate
6 months ago
Here's where you can find some incredible deals on exercise machines in 2022
1 year ago
Anthony Joshua's lockdown work-out routine seems weirdly achievable
1 year ago
Tyson Fury's nutritionist reveals how 'The Gypsy King' lost 30 pounds in 30 days
1 year ago
Five useful tips before returning to GAA training with fitness guru Brian Keane
Next Page