What dreams are made of.

Celbridge youngster Aaron Browne delivered the performance of his life to secure the Electric Ireland Leinster minor Championship for Kildare, their first provincial crown since 2016.

The half forward was in devastating form for Colin Ward's side from the first minute of normal time to the last of extra-time with Dublin unable to cope with his speed, movement and skill. 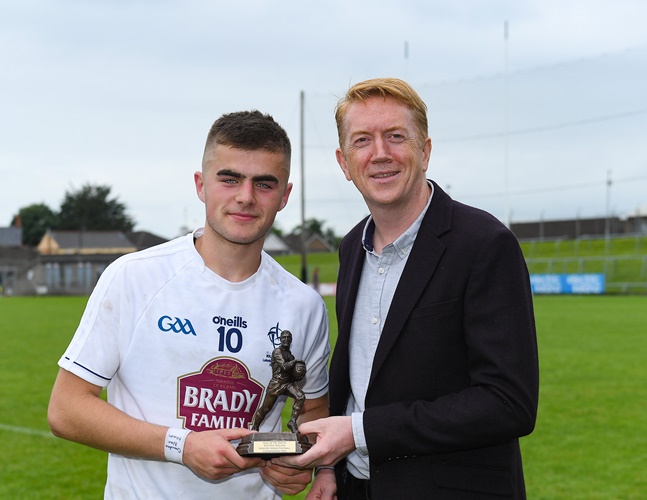 He ended his afternoon with one goal and seven of the finest points from open play as his guile and invention sparked a remarkable comeback and then kept the Lilywhites ahead once they got their noses in front.

Páirc Tailteann in Navan witnessed an absolute thriller and they were treated to an exhibition by a forward who has potential to become whatever he wants in this game.

Kildare got off to the better start in this one, with the similarly impressive Eoghan Bagnall getting them off the mark early on. Dublin kept it tight with Fionn Murray and Luke Swan impressing for them but you always had the feeling that if these Kildare forwards cut loose, that they'd go to town altogether.

Kildare were down by a point with 20 minutes to go

Aaron Browne scored the next three points in a row, his 3rd, 4th and 5th of the day to give them a one point lead in the Leinster minor final

This was his fifth from play 😍pic.twitter.com/GJcV01SWqx

And that was exactly how it panned out. Though Dublin led by a point at half-time and extended this lead to five through a Luke Swan goal early in the second half, Kildare were undeterred.

They took over late on in the second half and probably should have killed the game before Fionn Murray levelled it with the last kick. A brilliantly taken score by the Dub.

With only 15 seconds left, he sold a dummy to die for and kicked this nerveless leveller to keep Dublin alive

But in extra-time, the true story of the game was told. That man Bagnall stood tall again, he kicked a few wondrous scores including a goal not long after the beginning of am breise. But it was all about that man Browne, his slickly finished second half goal putting this game beyond the Dubs reach and sending Kildare to dreamland.

Adam Conneely was another who impressed for the Lillies, while goalkeeper Cian Burke was also night on unbeatable.

Some day for them.

Ah lads, 1-7 from play in a Leinster minor final

This fella is different gravy

What a beauty of a goal

Elsehwere, Billy Drennan and David Blanchfield were in majestic form for the Kilkenny minor hurlers who defeated Clare 2-13 to 0-14 in their quarter final round-1 clash in Thurles.

They recovered from last weekend's loss to Wexford, to beat Clare in the quarters

A handballer, this fella has golden wrists and is one for the future.

Up north, Tyrone defeated Cavan in the Ulster under-20 semi-final in Clones. 0-13 0-9 was the final score there with Darragh Canavan in sublime form for the Red Hand.