In the Joe McDonagh Cup, Killian Doyle was the top dog scoring an unbelievable 0-17 against Antrim, 0-6 of them coming from open play. The Raharney forward has been consistently brilliant this campaign and along with Laois' Paddy Purcell, has been one of th players of the competition. Purcell scored a great goal and set up a number of scores against Kerry in a good win for Eddie Brennan's team.

In the Leinster championship, Freshford club man Darren Brennan filled Eoin Murphy's sizeable boots with a number of eye-catching saves against Galway. In front of him, Huw Lawlor was very impressive but he's narrowly pipped by Daithí Burke for a place on this team. The Turloughmore man came out with a number of typically momentum-shifting balls.

Richie Leahy was a ball of energy in midfield while Cathal Mannion, Conor Whelan (every corner back's nightmare) and TJ Reid were a class apart. Joseph Cooney also fared well in the air.

In Munster, Sean Finn, Declan Hannon and Gearoid Hegarty were all impressive while Aaron Gillane was unmarkable. Meanwhile Sean O'Donoghue and Mark Coleman impressed in defence for Cork. 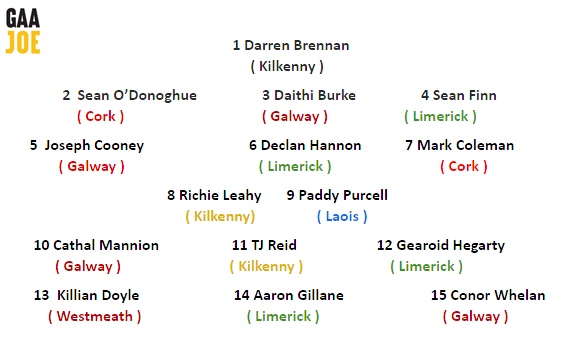 Here is a round-up of the weekend from Centra's #WeAreHurling campaign.

Galway are back baby

What a game of hurling, what a privilege to be in Nowlan Park today@CentraIrl #WeAreHurling pic.twitter.com/GaY9IUp50p

Clare are down but somehow not yet out

Limerick have beaten Clare by 18 points in the Munster championship

Aaron Gillane top scored with 1-11, Peter Casey chipped in with 0-4

The Yellow Bellies keep in touch

Rory O'Connor and Conor McDonald with the goals.

Spirited from Waterford but they were again outclassed

Horgan, Cadogan, Fitzgibbon, Coleman and Kingston off the bench the most impressive for Cork@CentraIRL #WeAreHurling pic.twitter.com/kUmNs15GJG

You may also like
4 weeks ago
"Hurling is like a wardrobe, whatever you put into it you’ll get back out of it" - Life at St Kieran's
2 months ago
Free spirit James Cha happy out in peaceful China
2 months ago
For Brennan, 'old-school' knock-out championship is the light at the end of the tunnel
2 months ago
We give you the All-Ireland hurling final, you tell us the man-of-the-match
2 months ago
Even injury couldn't hold Richie Power's genius back
2 months ago
The best sporting challenges to use time off to our advantage
Next Page