Harte, McShane and Sludden do the damage as McNamee solid as a rock in defence

It wasn't quite the 18 points of 2018, but it was still impressive by Tyrone and equally disappointing for Roscommon.

Mickey Harte's men started well in a partisan Dr Hyde Park and kept their foot on the throttle the whole way through to disappoint the home crowd and to get their Super 8s campaign off to a proverbial flyer.

END_OF_DOCUMENT_TOKEN_TO_BE_REPLACED

It was tight at half-time, Roscommon may well have been the better side in the opening period but Tyrone were clinical where the Rossies spurned good chances. And so the wait goes on for a real breakthrough victory to announce themselves as a big player in the All-Ireland senior football championships.

Tyrone on the other hand, are typically just tipping along nicely.

Playing with the wind at their backs, it was a defensive Tyrone side who started the better in Roscommon town. Brian Kennedy and Frank Burns ghosted forward for early points and of course, that pop-eyed machine Cathal McShane got in on the act soon after.

This is a different Roscommon team to last year though. The fiery Niall Daly got them off the mark while the man mountain Enda Smith kicked the score of the day soon after. 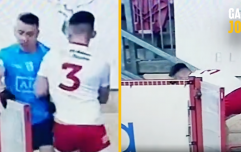 END_OF_DOCUMENT_TOKEN_TO_BE_REPLACED

With McCurry dawdling, the Boyle bomber up-ended him in the middle of the field before making a bee-line down the heart of the Tyrone defence. They came to tackle, but they couldn't get near as the spring heeled Smith stayed going. He showed awareness and skill to keep control of the ball before curling it over off the ground.

One worldie of a point.

Enda Smith is a man on fire in the Hyde 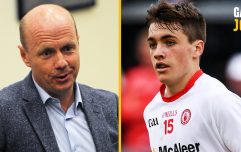 "What about the 10 or 12 who can't? What's left for them?" - Errigal Ciarán call for return to under-18 and traditional age groups

END_OF_DOCUMENT_TOKEN_TO_BE_REPLACED

The Rossies were getting excited in the stands. Even more so when Conor Cox landed a trademork stunner from the sideline moments after. They lost by 18 points in this same fixture last year, that was never going to be the case this time around with Anthony Cunningham shoring up their defensive frailties.

Tyrone are still a ruthless machine though. Niall Sludden, that dainty, clever and extremely slick Dromore centre forward was coming into own out there. He reeled off three points in quick succession helping the Red Hand take over this game. Diarmuid Murtagh and Smith kept figthing the fight for Roscommon but McShane helped Harte's men into an 0-8 to 0-6 half-time lead.

When you consider that Smith and Cregg both had goal chances saved, Roscommon will have been disappointed with that standing.

And they were made to rue those missed chances in the second half. Typically, the Tyrone beast kept on cruising through the gears as their insanely fit squad made powerful run after powerful run. Peter Harte roared into the game while Matty Donnelly and their inspired full forward McShane pointed the way home.

He's now the top scorer in the 2018 championsip. 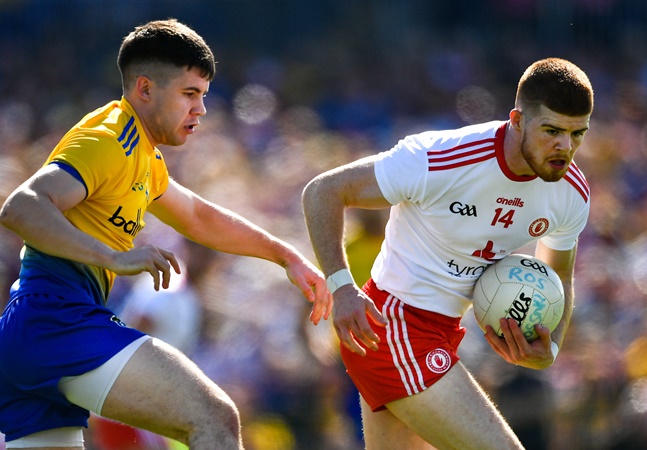 Roscommon's struggles meanwhile were summed up by the display of their talisman Conor Cox. While the Kerryman started well, he was on the edge of it in the second as Tyrone took over. And while that was a disappointment for him, credit must go to Tyrone defender Ronan McNamee who was stuck on his coattails the whole evening long.

McNamee is having one hell of a season in the last line of the Tyrone defence, having kept Cavan's Dara McVeety quiet the weekend previous. It was that defensive solidity that won out again today.

Tyrone are moving along nicely. The Rossies have work to do yet, and they're already on the back foot here.


popular
Gearoid Hegarty's harsh red card leads to a heated debate in The Sunday Game studio
French media rave about Caelan Doris and 'Playstation rugby' from Leinster
Chelsea team-mates 'shocked' as Andreas Christensen reportedly refused to play in FA Cup final
Ralf Rangnick wants to hold Man United debrief meeting with Erik ten Hag
Liverpool and Chelsea fans go viral after bizarre FA Cup final confrontation
Tailteann Cup draw doesn't pass without controversy as repeat-pairings and regional draws come under scrutiny
Pep Guardiola reveals what he said to Mark Noble during touching embrace
You may also like
3 months ago
"Tonight we're training on astroturf because we can't get any pitch facilities with lights" - facility issues an ongoing thing in women's game
3 months ago
"We're not proud of it" - Tyrone hold hands up for their share of brawl blame
3 months ago
David Gough sends off five players as Armagh give Tyrone an almighty land
5 months ago
Tyrone GAA star finds himself 12th in Premier League Fantasy Football rankings out of 8 million
5 months ago
What is the story with Tyrone clubs' woeful record in the Ulster championship?
7 months ago
Alex Ferguson wrote Mickey Harte a letter - ex Tyrone boss reveals in new memoir
Next Page