We are getting no closer to the truth of what is going on here.

There has been a lot of fallout since congress passed the controversial proposals to re-structure the All-Ireland Football Championship.

The motion, which will see a round-robin format (Super 8) introduced to the quarter-final stages, has received a lot of criticism, with many arguing that it will only widen the gap between the stronger and weaker counties. 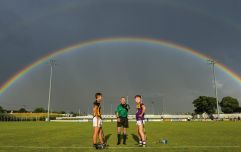 END_OF_DOCUMENT_TOKEN_TO_BE_REPLACED

The Gaelic Players Association (GPA) voted against the proposal.

They outlined the reasons for their stance three days before the vote took place, the main one of which was that they alleged there was a lack of consultation with players regarding all aspects of the proposal.

The GAA's chairman on the Standing Committee on Playing Rules, Jarlath Burns, spoke to the GAA Hour recently where he made a number of accusations regarding the lack of consultation between the GPA and its members.

Burns told the GAA Hour that a Whatsapp message was sent out to players three weeks before the vote in order to gain their views on the Super 8 proposal.

Burns said that this is damning of the leadership within the GPA, considering the organisation were made aware of this proposal since last August.

Now the GPA have released a statement where they outlined the level of consultation which has taken place between the organisation and its members.

An excerpt of the statement is below:

The GPA has engaged extensively with our members with regard to competition reform over the past 18 months in the form of surveys, squad meetings, regional workshops, the establishment of a steering group of current and former players and through a multitude of communications providing information and seeking input and feedback at various junctures.

The most recent consultation with all inter-county squads was to ascertain a consensus as to how the sole GPA vote at Congress would be employed.

Over 70% of squads expressed a wish to vote against this proposal. The reasons for the player opposition to this proposal have already been outlined.

The statement also outlines the various levels of engagement which took place since they received the proposals in August 2016.

It is interesting that there is no mention of the Whatsapp message in the statement so perhaps there is some substance to the remarks made by Burns.


popular
Sean Dyche set to be named Everton manager after Marcelo Bielsa talks break down
Roy Keane flatly rejects longstanding perception of ex-Man United midfielder Paul Ince
Allianz National Football League Round 1: All the action and talking points
Conor McGregor hit by car ‘at full speed’ while cycling
Roy Keane leaves ITV pundits in stitches after Pep Guardiola's pre-match interview
Quiz: Identify these 15 football clubs that are not named after a place
RFU issue statement following backlash over decision to lower tackle height
You may also like
10 months ago
"It's disrespectful" - Eamon McGee blasts Colm O'Rourke's "blasé" comments about player expenses
11 months ago
"I think it will pass overwhelmingly" - Motion to integrate GAA, LGFA, and Camogie Association ready for congress
11 months ago
GPA motion calls for integration between the GAA, LGFA and Camogie Association
1 year ago
GPA CEO Tom Parsons believes that the league-based championship is the future of Gaelic football
1 year ago
GPA ask for 'respect to be shown to the amateur status' of Tyrone players
4 years ago
GPA finally weigh in on Kildare debacle
Next Page