"He was going around canvassing, telling boys to vote for him at the AGM"

Four years. For Tullaroan, it felt like a decade.

Traditionally you see, they're Kilkenny's most successful club. 20 senior titles. In the 1900s, they were an unstoppable force.

But intermediate dragged them down in 2014, and it sucked them in. Kilkenny is a real quagmire when it comes to club hurling and if you sink once, you'll keep on sinking. Junior is only two years from senior but it's a long way back up.

As for Tullaroan, they were stuck in the middle.

The Kilkenny intermediate championship is better than senior in most counties and 'the sash' were punished by ruthless teams. First it was Carrickshock.

They narrowly edged Tullaroan in a Kilkenny semi-final, before going on to win a Leinster and an All-Ireland. Tullaroan watched Ballyragget win Leinster the following year.

But if '16 and '17 were painful, 2018 was a full-on disaster. Try five up with seven to play in a county final. A bitter pill? Tommy Walsh could hardly walk off the field.

Graigue Ballycallan reeled them in and the 'bottler' tag did the rounds. Tullaroan didn't know what they had to do.

But in 2019, they found that extra edge. This time, Thomastown were the bridesmaids as an inspired Peter Walshe propelled his club to a priceless county final triumph.

Getting out of Kilkenny club hurling always seems to be the toughest part pic.twitter.com/sRp0JolTT3

END_OF_DOCUMENT_TOKEN_TO_BE_REPLACED

With the pressure off, this talented team romped through Leinster.

And now they're odds-on favourites to win an All-Ireland. The team's talismanic centre back Padraig Walsh reflected on a whirlwind few weeks for the club on Monday's GAA Hour Show.

"If you get stuck down intermediate in Kilkenny, you could be there for a long time," he said.

A couple of things changed this year. First of all, Padraig was back and Tommy was pushed into the forwards.

"It's my first ever time playing in the backs for the Tullaroan seniors. It's freshened things up and Tommy is flying it up in the forwards there this year...he works like a dog up there and the rest of the boys feed off his energy..."

Tommy Walsh still plays with the fire and fury that won him nine All-Stars in a row.

What a score, what a player. 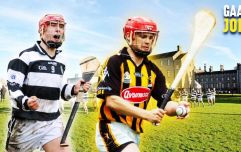 END_OF_DOCUMENT_TOKEN_TO_BE_REPLACED

Another turn-up was Shane Walsh becoming the team's captain. He's the youngest Walsh brother, and he wouldn't take no for an answer.

"I think he decided himself at the start of the year he was going to be captain. He was going around canvassing, telling boys to vote for him at the AGM. I think he just forced himself into that role, and he convinced lads to pick him anyway..."

From a Kilkenny perspective, Walsh has been up, down and all around the pitch from wing back to full back to midfield, but contrary to the general conception, he loved it in full back.

Anywhere inside the four white lins.

"I didn't mind playing there (full back) at all. I liked playing there. My father played full back for the club so he was delighted when I went back there for a while.

"To be honest, one of my favourite hurlers growing up was JJ Delaney and he got moved in to full back and he never complained about it or anything like that. So when I got the chance to go in there, I was wearing one of the same jerseys as one of my heroes. Noel Hickey as well - getting a jersey that they wore before you, it's a great honour really...I don't care where I play, I'd be happy to line out anywhere.

You can listen to the Padraig Walsh interview, and much more from Monday's GAA Hour Show.


popular
QUIZ: Can you name the Football Italia cult heroes? | Part 2
The SportsJOE 12 o'clock quiz | Day 72
Justin Gaethje tells Conor McGregor to wait his turn
SportsJOE 2000s Football Quiz | Round 3
Only a true nerd will get full marks in our 2016 football quiz
"Paulie was like Casper the Ghost... he had lost about two stone in the two days"
The SportsJOE 12 o'clock quiz | Day 71

You may also like
1 month ago
Free spirit James Cha happy out in peaceful China
2 months ago
For Brennan, 'old-school' knock-out championship is the light at the end of the tunnel
2 months ago
We give you the All-Ireland hurling final, you tell us the man-of-the-match
2 months ago
Even injury couldn't hold Richie Power's genius back
2 months ago
The best sporting challenges to use time off to our advantage
2 months ago
From dancing around Nowlan Park to that Croke Park buzz again
Next Page