It turned into the Aaron Gillane show in Cusack Park.

Mary I's star man didn't shoot the lights out in their Electric Ireland Fitzgibbon Cup quarter final against CIT last week. NUI Galway must have known they were in for it in the semi.

Rarely does a man like Aaron Gillane put two quiet days back to back and come Wednesday in Ennis, he was absolutely rearing for it.

By the end of a physical 65 minutes between these two hurling strongholds, it was the Patrickswell club man who was the difference between them. He ended his afternoon with 1-12, 0-6 from frees, 1-0 from a penalty, 0-1 from a sideline and 0-5 from play after a truly inspired individual performance.

That brings his college to yet another Electric Ireland Fitzgibbon Cup final and with Gillane in this type of form and with Thomas Monaghan, Luke Meade, Craig Morgan and plenty of others driving it on behind him, Jamie Wall's men will be quietly confident ahead of their meeting with the mighty UCC in the decider.

Mary I had to do it the hard way though.  Jeffrey Lynskey's NUI Galway side flew out of the blocks in Ennis with Galway senior Brian Concannon scoring a cracker on the run to get them going early on.

The powerhouse that is Kinvara's Conor Whelan followed his blazing trail with a trademark hard-earned score from play and from an angle soon after. 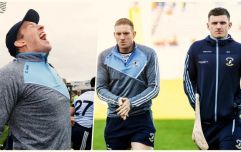 END_OF_DOCUMENT_TOKEN_TO_BE_REPLACED

NUI Galway had the better of it in these opening stages with Evan Niland and Liam Forde also looking sharp in attack but Mary I never panicked.

And with a man like Gillane up top, why would they?

Kilruane McDonagh's club man Craig Morgan powered into the game from wing back and his zinging deliveries into the teacher training college's forward line were only begging to be met.

And Gillane met them head on.

He reeled off two fine scores, off right and off left in an explosive two minute spell but there was more to come.

Colin Guilfoyle was fouled just before half-time and with the NUI Galway goalie doing everything to put Gillane off, he responded perfectly with a powerful low shot before some showboating.

The game continued in that vein in the second half, with Niland and Gillane trading scores but nobody in the NUI backline could manage Gillane and in the end, that was enough for the I.

popular
The SportsJOE 12 o'clock quiz | Day 143
Three teams Leinster can pit against each other to prepare for Munster
SportsJOE 2000s Football Quiz | Round 12
Rory McIlroy defends Dustin Johnson after Brooks Koepka comments
Collin Morikawa makes huge world rankings leap as Lowry drops back
Only a Champions League fanatic would get full marks in this quiz
The SportsJOE 12 o'clock quiz | Day 142
You may also like
1 month ago
"Shane was just gifted. He could play centre back, centre forward, he had everything"
1 month ago
Magician Dowling showed his true character as unwilling super-sub
4 months ago
We give you the All-Ireland hurling final, you tell us the man-of-the-match
4 months ago
April club month a goner as virus threat causes longer delays
6 months ago
"If I didn't improve, I definitely wouldn't have got in anyway"
7 months ago
1-32 table of the most competitive hurling championships in Ireland
Next Page