It's never too late.

Every county has the tale of that amazing player who never played minor.

It's hard to believe, sure. How on earth was he not picked up as a teenager? I don't care how small he was, have you see the talent literally dripping off of that man? If he never played minor, there's something seriously wrong with the coaches. Or with the sport.

They're almost a source of comfort to most - especially the late developers. If they never played minor and still went on to do what they did, surely anyone could do it. That's the thinking anyway.

Every club has late developers - Brian Fenton is living proof that it's never too late https://t.co/9XTkeA81ST #GAA

It doesn't really matter where you're at exactly at 16 or 17, it's when you start playing adult football when it counts.

The list of high profile footballers who never made their county teams at underage level is incredible. There are All-Stars and All-Ireland titles coming out of their ears and, yet, they didn't make the cut as teenagers.

"At the end of the day, it's the guys who want it more than anyone else usually end up there - the guys who are willing to put the effort in and the training and to sacrifice," Bernard Brogan told SportsJOE after accumulating his fourth All-Ireland back in October.

"When lads are out drinking pints at 18, 19, 20, these are the guys that are playing with their clubs and sacrificing and training extra. People can get very disappointed if they don't make their underage team - their minor or the under-16 teams - but there's always hope."

There's always hope. And that's certainly the case if you look at a team you could put together of players who never played minor but went on to become some of the finest servants and finest talents of the game. 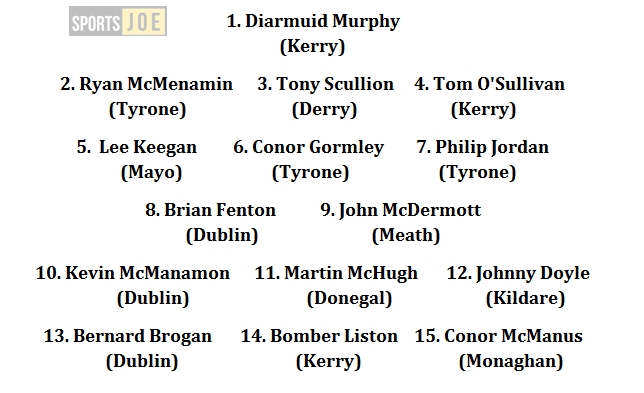 You go through that in disbelief.

To put it into perspective, look at the names who didn't make it. 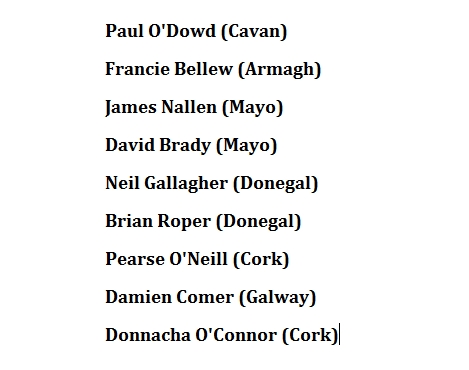 Imagine trying to pick just six subs from that bench.

It's actually that competitive this team with too many lads available to play on it, that the whole thing descended into an old-fashioned argument about the best way to set it up and the best personnel to include.

Contrary to popular belief, Kieran Donaghy did come on in a minor championship game at midfield back in the day alongside Donnchadh Walsh. Aidan O'Mahony, too, came on at wing back in the All-Ireland semi-final against Laois in 1998. Michael Darragh MacAuley has also played minor football.

Mark O'Reilly. Corner back. Man of the Match in All Ireland in 99 v Cork

His son might not have played minors vod! Us clonoe boys dont play minors haha

Eoghan O'Gara, Denis Bastick and Michael Fitzsimons all never played minor or u21 for Dublin

Paul Murphy for Kerry. He didn't even play u21s!!!

There were other near-misses but just because they were over-qualified.

There were also lads who were so far out of reach that it isn't even funny.

Yes played in goal for two years as a minor and was outfield for my final year.

But whatever about Bryan Sheehan and all his versatile longevity, the point is that it is not too late for you. Never give up.

popular
The SportsJOE 12 o'clock quiz | Day 110
QUIZ: Name every player that's scored three or more Premier League hat-tricks
The SportsJOE 12 o'clock quiz | Day 109
'ROG was the kingpin... he just wanted to win, win, win' - Barry Murphy
"Some of the guys have put a lot into it" - Felipe Contepomi confident Leinster can start fast
What Leinster's strongest XV looks like when everyone is available
SportsJOE 2000s Football Quiz | Round 9
You may also like
1 month ago
What is the sport they are playing in Normal People?
2 months ago
QUIZ: Name the missing player from the All-Ireland final team sheets
2 months ago
QUIZ: How many of the 10 most successful football counties can you name without making a mistake?
2 months ago
The SportsJOE 12 o'clock quiz | Day 31
3 months ago
The Andy Moran GAA Isolation Workout
3 weeks ago
'Sheep in a heap' become kings of Ireland - The crazy hurling summer of 1998
Next Page