The GAA community comes together in support of Sean Drummond

The Dublin footballers wore 'Support 4 Drummo' jerseys in the Leinster final win over Kildare and the Dublin hurlers did the same in their final group game against Galway.

Sean Drummond has a number of club-mates on both teams. He would have played with Con O'Callaghan and his brother Cian when they were younger while, as fellow Cuala men, the jerseys will also have meant an awful lot to Mark Schutte and Michael Fitzsimons.

There was a noticeable amount of good-will in the air on that same Leinster final day as, whether they were from Kildare or Dublin, supporters put money in the buckets that volunteers held out for the good of Sean Drummond.

END_OF_DOCUMENT_TOKEN_TO_BE_REPLACED

The GAA community is certainly behind him.

Seán Drummond is a former Cuala & Dublin underage player who suffered life-changing injuries in a traffic accident in London after he'd finished his college exams in 2019.

The Drummond family, their friends and the wider community were delighted to welcome Seán back to the family home earlier this year following a stay at the National Rehabilitation Centre in Dún Laoghaire. The house has been adapted to meet his needs thanks to the generous support received from donors so far. 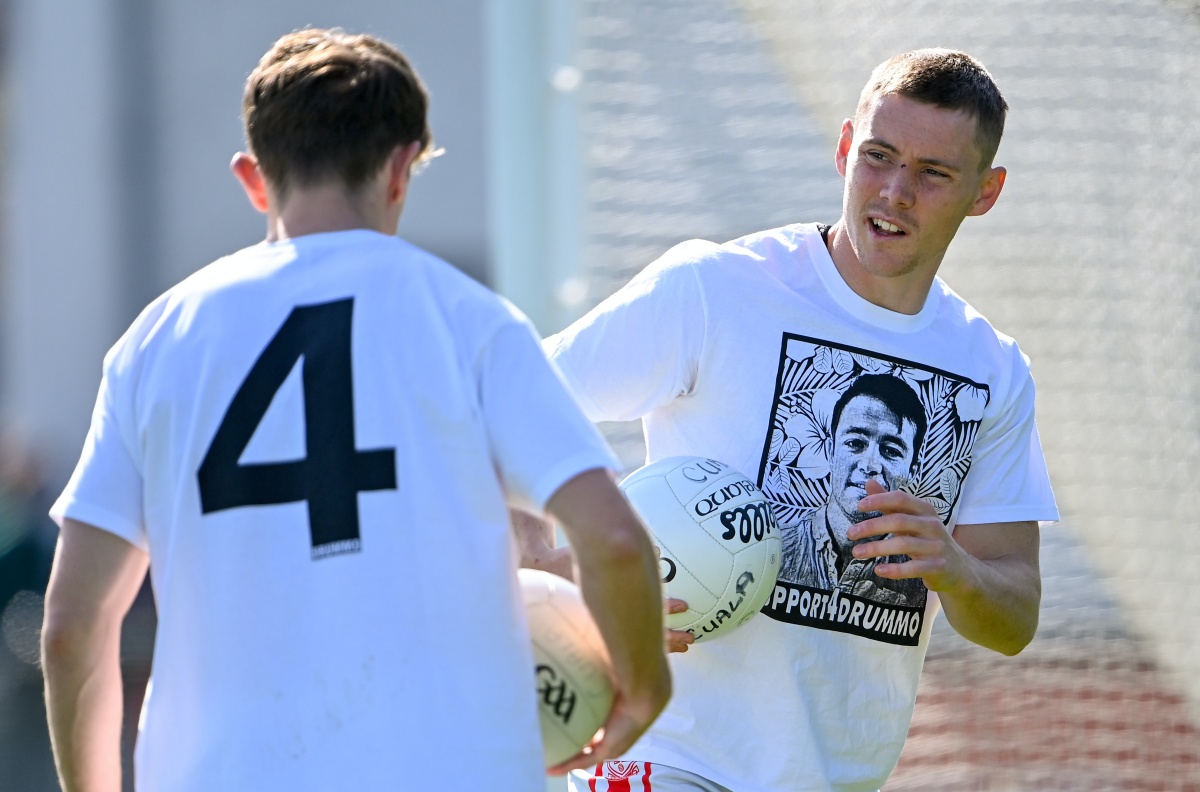 27 September 2020; Con O'Callaghan, right, and Michael Fitzsimons of Cuala wearing a t-shirt in the warm-up in support of their team-mate Seán Drummond, who was injured in an accident last year, before the Dublin County Senior 2 Football Championship Final match between Cuala and St Brigid's at Parnell Park in Dublin.

END_OF_DOCUMENT_TOKEN_TO_BE_REPLACED

His team-mates and the wider Cuala GAA club have been central to these fundraising efforts as have AIG, who gave over their jersey sponsorship of Dublin’s four senior teams, men’s and women’s football, camogie and hurling, for a round of matches in the last month.
The General Manager at AIG Ireland Aidan Connaughton commented says that they were delighted to be able to support such a worthy cause.

“AIG is proud to be able to lend our support to such a worthy cause as Support4Drummo. Seán has shown tremendous resilience so far in his recovery and the ongoing fundraising efforts will ensure that he continues on that road to recovery

The Sean Drummond Trust will use all donations to help Sean regain as much independence and self-determination as possible. To make a donation, click here.


popular
Ranking the best county GAA songs of all-time (32-1)
"It was unfair on the Galway backs” - Tomás Ó Sé admits that Kerry benefitted from unfair rule
"I’ve never heard someone say something as stupid” - Katie Taylor blasts Jake Paul's rematch comments
"I don’t trust you" - Joey Barton delivers brutal dismissal of Irish defender
Antonio Conte 'banishes' four Tottenham players from first-team
"I remember just hugging this Irish guy" - How one Kiwi rugby star reacted to Ireland's historic series win
"I'll ask for everyone that comes to the game to wear purple and roots for us" - Pat Fitzgerald
You may also like
1 month ago
"Coming off the field there, I just had a word with Ciaran Kilkenny" - O'Connor hails Kilkenny after pulling the fat out of the fire
1 month ago
"Everyone in Dublin should be proud of them" - Farrell gives a sporting post-match interview
1 month ago
Cometh the hour, cometh the man
1 month ago
Dublin edge Kerry in combined team as 'underdogs' get the nod on paper
1 month ago
Roy Keane makes good on bet after seeing Cork fall to Dublin
1 month ago
"All of a sudden he had me midfield with Niall Scully. We played Na Fianna and I was chasing after Eoin Murchan."
Next Page