There were emotional scenes in Derry last night as, having beaten Newbridge with a late-winner, the Bellaghy players and mentors ran into their bereaved son Declan Brown who, after burying his father that morning, came on as a sub to help his club over the line.

It was a team pulling together, it was a community standing as one and without doubt, as the curtain closed on an entertaining evening in the Derry senior football championship, it was the GAA at its absolute best.

Having stepped up to nail a last-gasp winner, goalkeeper Peter Stewart was Bellaghy's hero of the hour but on a wintry night up in Owenbeg, on a sad for Derry football in general, this was about a whole lot more than just a game. It was about grieving together, about recovering together and it was powerful when, just after the final whistle, the Bellaghy players and mentors ran, skipped and hopped into the young man who was living one of the toughest days of his life.

The bravery he showed will have made his late father proud though and while this win won't have healed the pain, along with the solidarity shown by his team-mates, it will certainly have dulled it.

Bellaghy goalkeeper Peter Stewart kicks a 65th minute winner against Newbridge. On the final whistle seconds later they all sprint to Declan Brown, who buried his father Damian this morning and came on late in the game. The emotional connection of a GAA community is unrivalled pic.twitter.com/BJrZoNA27C

Damian Brown was a Bellaghy player, manager - he was the son of the club's former chairman who, in 1997, was brutally murdered while he locked the club's gates. On Tuesday, the Bellaghy club paid tribute. 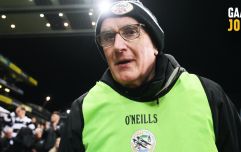 END_OF_DOCUMENT_TOKEN_TO_BE_REPLACED

“We are deeply saddened to learn of the untimely passing of our former player, manager and clubman Damian Brown.

“A tenacious defender on the pitch and a gentleman of great character off it. His loss will be felt by everyone who knew him.

What the GAA is about pic.twitter.com/56GdkcLAgR

Statement from Bellaghy GAC in relation to the investigation into the murder of Seán Brown. pic.twitter.com/NTT3Zg9PnG