There have been plenty of question marks about the Kerry defence in years gone by but this year, as they marched towards All-Ireland glory, that defence only conceded one goal in the championship.

Goalkeeper Shane Ryan obviously played a part in that, as did the highly regarded Tom O'Sullivan, but it was a team effort and two other members of Kerry's last line were just as impressive.

Graham O'Sullivan, for one, is a fresh face on the team. He won All-Ireland minor titles in 2015 and 2016, the latter of those alongside David Clifford and Seanie O'Shea but it was this year when he came of age.

END_OF_DOCUMENT_TOKEN_TO_BE_REPLACED

And he had his best day yet on Sunday. The number two jersey has switched many hands since Marc Ó Sé's retirement in 2016 but, finally, after all that, it looks like Jack O'Connor has found his man.

And, in a 23-year-old from his own club Dromid Pearses, he hasn't to go too far to find him.

O'Sullivan kept the prolific Robert Finnerty scoreless in the final but he was just as eye-catching going forward. He played two brilliant kick-passes into David Clifford for marks in the early stages and, with the rest of the team struggling to get into the game at this point, O'Sullivan's attacking gusto helped them settle in.

He also kicked a fine point for a finish.

END_OF_DOCUMENT_TOKEN_TO_BE_REPLACED

"You talk about fellas getting an opportunity and grabbing that jersey," said Darran O'Sullivan on The GAA Hour, "and that's what Graham has done. At the start of the year, I would have had Mike Breen from Beaufort ear-marked to start. He got a bad injury then, and was ruled out.

"Same thing with Dan O'Donoghue. Graham has come in then - I would have seen him as a half back naturally - but he's come in, and every game, without being outstanding or grabbing headlines, he's just got better and better. I was just watching him yesterday as a fella who looks comfortable in his own skin in that jersey."

"It's a rare one! It doesn't happen very often. I'll take them when they come!"

Graham O'Sullivan was thrilled to have put his name on the score-sheet! pic.twitter.com/sUGjIybcWL 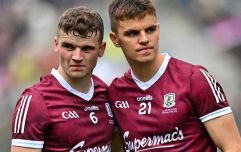 END_OF_DOCUMENT_TOKEN_TO_BE_REPLACED

"The number two jersey has been a tough one to fill since Marc Ó Sé retired," added Galway man Finian Hanley, "but he's really taken it by the scruff of the neck. Robert (Finnerty) wasn't in the game at all, he really curtailed him so, yeah, that was a huge performance."

Alongside him, Ballydonoghue's Jason Foley was solid as a rock. Foley has been on the team for a few years now but this is the first year he's really silenced the doubters.

A former Irish international sprint hurdler, Foley had the speed and the athleticism for Damien Comer and Galway's full forward just couldn't get away from him, and that's why he came in for plenty of praise too.

"There were question marks about Jason too, coming into the game, would he have the power for Comer? Would he have the speed? But he's a great athlete, he was a hurdler, he's way faster than he looks. He has long arms too and he'll get a few flicks in there," says Darran O'Sullivan.

Foley represented Ireland in the SIAB Schools' Track & Field International 2013, where he won a silver medal in the hurdles as well as a bronze in the relay. His 2014 PB of 14.76 for the 110m hurdles is another time that would stand up well in many races at that level.

"From my point of view as a get-a-hand-in defender," Finian Hanley adds, "it was great to see a performance like his where he just knocks the ball away, that inspires teams as well. It's not pretty, but I'm sure when he broke the first kick-out off Comer, the boys were saying 'right Foley's at it today, he's not going to give Comer a sniff. It was an old-style full back performance but he stuck to him like glue.

Donegal legend Eamon McGee on how football fans may be spoilt.


popular
"He can add something to our attacking line up" - Jamie Clarke signs for Northern Irish soccer club
Antonio Conte 'banishes' four Tottenham players from first-team
Ranking the best county GAA songs of all-time (32-1)
Rio Ferdinand's greatest Premier League starting XI has some strange selections
Roy Keane makes three surprise picks in Man United's greatest Premier League team
"I’ve never heard someone say something as stupid” - Katie Taylor blasts Jake Paul's rematch comments
Raheem Sterling admits that he was unhappy with Pep Guardiola's team selection last season
You may also like
2 weeks ago
Darran O'Sullivan on the post-match gesture that shows what Jack O'Connor means to Kerry
2 weeks ago
JJ Delaney on how Brian Cody kept him grounded after Hurler of the Year honour
3 weeks ago
"We were known as stab city, the butt of everything. Of all the things JP has done, he has made everyone so proud to be from Limerick"
1 month ago
McCarthy still harder than a brick wall
1 month ago
"He was getting a bit disillusioned" - How Damien Comer rediscovered his fire
1 month ago
"Sometimes a manager has to make those bold and tough calls." - Kerry's Paudie Clifford conundrum
Next Page