A video clip showing Davy Fitzgerald's Limerick IT in an angry confrontation with members of DCU Dóchas Éireann's management has surfaced online - and it's not for the easily offended, but it's not anything you wouldn't see at a GAA game any Sunday.

DCU beat Davy Fitz's Limerick IT 3-15 to 2-17 in the Fitzgibbon Cup in Moylish on Monday night, with the Glasnevin college springing a surprise to mark themselves out as a force to be reckoned with.

And it looks as if Fitzgerald was in no mood for niceties at the full-time whistle.

A 25-second clip, uploaded by YouTube user Slippery Dodger, appears to capture an extremely foul-mouthed exchange between Davy and his counterparts.

It's unclear who exactly he is having words with, but it's crystal clear that both teams have some rather strong opinions of each other in that moment. 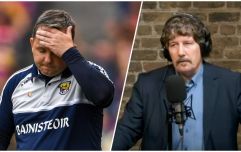 "Wexford lost the game because they went traditional... not because of a sweeper"

END_OF_DOCUMENT_TOKEN_TO_BE_REPLACED

Carlow fared better in the adverse weather conditions in Dangan while reigning champions Mary I secured an eight-point win over a spirited Trinity side, setting up a clash with NUIG next Thursday.


popular
"There's times I do think I probably have let people down but in fairness, I have got good support from back home"
Goal disallowed in Dublin SFC because player wasn't wearing his gumshield
The SportsJOE 12 o'clock quiz | Day 138
The SportsJOE 12 o'clock quiz | Day 137
All hail Alexis Sanchez, the man who played Manchester United like a piano
"I was asked to be the team doctor. I thought well I'll never play senior camogie for Galway"
"That's a risk I'd be willing to take" - Byrne ready and raring for a championship
You may also like
1 year ago
"If he doesn't get to the All-Ireland next year, it will feel like a disappointing year for Wexford"
1 year ago
Emotional Davy Fitzgerald admits he is unsure of Wexford future
1 year ago
'Is this actually from Davy or is it one of the boys taking the piss?'
1 year ago
Davy Fitzgerald gatecrashes GAA Hour Wexford
1 year ago
"If there's a day when Davy would roll the dice, it might be Sunday"
1 year ago
Davy Fitzgerald sent to the stands after blowing up on the sidelines
Next Page