The gauntlet has been laid down.

In six days' time, Brolly v Wooly will top bill for The Great Debate and it's beginning to heat up. 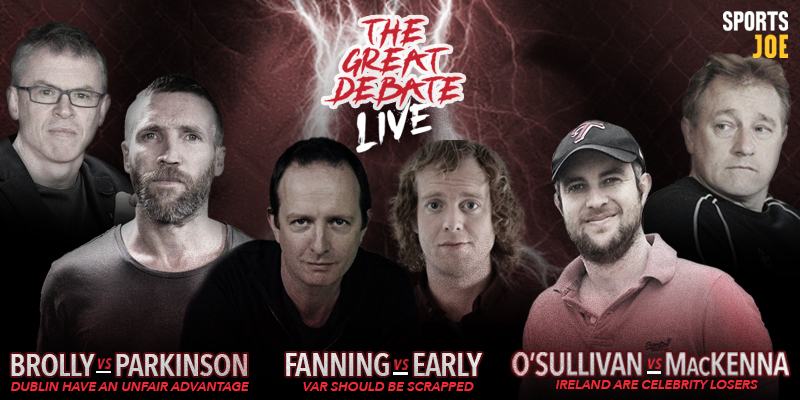 Where: The Mansion House, Dublin

On The GAA Hour, Parkinson started the trash talk ahead of his bout with Brolly. Coining a new name for him, 'Joe Umbrella,' Wooly ran through what their debate is going to be about.

Titled Dublin have an unfair advantage, Parkinson will be arguing for that case and Brolly will try to disprove him. But Wooly sees it a little more black and white.

"Basically, I'll be dealing in facts and Joe will be doing what he loves - being biased towards Dublin."

Watch the hype build below.

Wooly starting the trash talk ahead of the Great debate.👊

Most of the tickets are gone but there are still some left here.

You may also like
1 year ago
Seven years of Twitter debate between Joe Brolly and Colm Parkinson coming to a head next week
1 year ago
"All that for this?" - the anticlimax of winning an All-Ireland for Joe Brolly
1 year ago
"The referee must have been clearly influenced by the propaganda coming from Kerry" - Joe Brolly
1 year ago
'The game is a farce' - Joe Brolly takes aims after late team changes
1 year ago
'Paul Geaney stood up and was counted when Kerry needed him'
1 year ago
Colm O'Rourke rubbishes claim that Michael Murphy is player of the decade
Next Page