Mayo were forced to dig deep to secure a winning start to their Allianz National League campaign.

A gale force wind and torrential rain at MacHale Park on Saturday night left Mayo trailing Roscommon at the break but an impressive comeback in the second half, culminating in a late Brian Reape goal, earned the hosts a hard-fought 1-8 to 1-7 victory.

The weather wasn't the only factor that James Horan's men had to contend with as they had to battle through some questionable behaviour from the visitors.

Roscommon's Donie Smith can perhaps consider himself lucky for managing to stay on the pitch despite seemingly making contact with the eyes of Keith Higgins after 26 minutes. 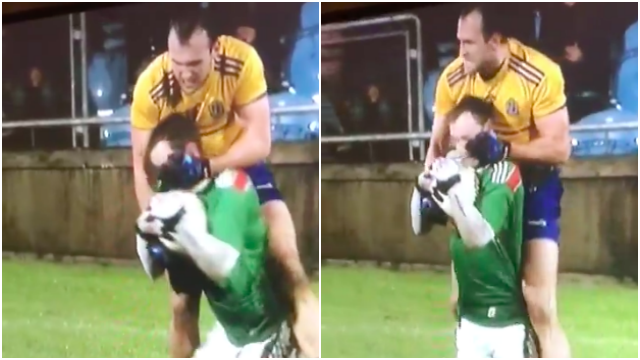 Viewers were in little doubt about the contact although Smith will likely dispute any intention if and when the incident is looked into.

Supporters were also none too pleased with the fact that Smith threw himself to the ground holding his face after Higgins appeared to make minimal contact with his forehead by way of reaction.

We've seen several accusations of eye gouging in the GAA in recent years; with Philly McMahon, James McCarthy and Eoghan O'Gara all having to respond to allegations of that offence.

It remains to be seen whether Smith will face any retrospective action but supporters feel that the clash should warrant a lengthy suspension.

Bizzare tactics from Roscommon with that wind. Sums up the mindset of the game at the moment. Donie Smith wasn’t booked and will be in big trouble

@MayoGAA am aghast that Donie Smith is still on the pitch

I think it's fair to say Donie Smith won't play much more of this league campaign after getting away (for now) with that disgraceful eye gouging. No place in the game for that sh*t! #AllianzLeagues

Donie Smith should get a nice long suspension for the eye gouging. Lowlife behaviour. #Mayogaa

Donie Smith might be in a whole lot of trouble after this game. That did not look good.

Donie Smith got away with a red card in first half. Should not get away with suspension. Camera angle very clear


popular
"I did enjoy Roy Keane absolutely sh*tting his pants when someone tougher than him challenged him"
Josh van der Flier recalls first Leinster training session with Brian O'Driscoll
The SportsJOE 12 o'clock quiz | Day 193
You'd be doing extremely well to get 100% in this US sports badge quiz
The SportsJOE 12 o'clock quiz | Day 192
SportsJOE 2000s Football Quiz | Round 2
Johann van Graan addresses talk of Munster return for Simon Zebo
You may also like
3 weeks ago
GAA voices need to make more noise in fight against disjointed restrictions
4 months ago
"Maybe my leadership can be a bit raw. It's something I've had to improve on"
5 months ago
Lee Keegan on what he misses most
6 months ago
Andy Moran: Using the time off to become a better player
6 months ago
The GAA Hour | Football | Mayo 'standing off', Congress analysis and the Tunnel row
7 months ago
Mayo issue update on crunch Allianz Leagues clash with Kerry
Next Page