Donegal GAA have confirmed that they are tabling a motion to have one of Dublin's All-Ireland quarter-final group stage games moved from Croke Park.

Last summer Donegal GAA requested a meeting with the GAA to seek clarification on how any county may use a ground as both a 'neutral' and 'home' venue.

Dublin were drawn alongside Donegal in the inaugural All-Ireland quarter-final group stage and the Donegal County board wanted clarification from the GAA on the issue with the association claiming in a statement that the issues highlighted by Donegal would be considered as part of their review process and that if Central Council collectively felt that non-structural changes to aspects of the Championship were required, that these could be put to Annual Congress in 2019 for consideration. 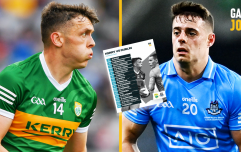 END_OF_DOCUMENT_TOKEN_TO_BE_REPLACED

Donegal will now follow through with that process and confirmed that a motion preventing Croke Park being designated as a neutral venue for the Super 8s will be tabled at Congress next month.

Gaa Hour host Colm Parkinson wrote in his SportsJOE columnlast summer that it's not fair that Dublin can play at Croke Park twice while every other team in the championship is permitted to just one home match.


popular
Inbetweeners star sends All-Ireland semi-final message to Derry cult hero
Dublin edge Kerry in combined team as 'underdogs' get the nod on paper
"Jesus they never shut up, do they?" - What it was like training under Rory Gallagher and Jim McGuinness
Only die-hard rugby fans will get full marks in our Ireland vs. All Blacks quiz
"Sometimes a manager has to make those bold and tough calls." - Kerry's Paudie Clifford conundrum
Local press follow the All Blacks but miss out on Tadhg Furlong show
Your guide to a massive weekend of sport and how to stream it all
You may also like
2 weeks ago
"All of a sudden he had me midfield with Niall Scully. We played Na Fianna and I was chasing after Eoin Murchan."
2 weeks ago
"You probably need that to sweat out all the Dunkin Donuts" - Mannion loving life in Boston
1 month ago
The GAA community comes together in support of Sean Drummond
1 month ago
Just because they signed an autograph doesn't mean they're not hurting inside
1 month ago
Kilkenny, Dublin and Wexford could all still end up going out of the championship next Saturday
1 month ago
Familiar feeling for the Dubs as Kilkenny rack up a cricket score
Next Page