The times they are a changing.

"One last memory to treasure, from an already bulging collection," wrote Dick Clerkin in the Irish Examiner not long after he'd retired from inter-county football.

A treasured memory from a disappointing day.

Monaghan had been knocked out of the championship by Longford and Clerkin, an unused substitute in Clones, knew that was it for him.

It wasn't all bad though. A Farney stalwart for 17 years, he'd gotten to live the dream for a long time and he departed that day with the only lap of honour he would have wanted. 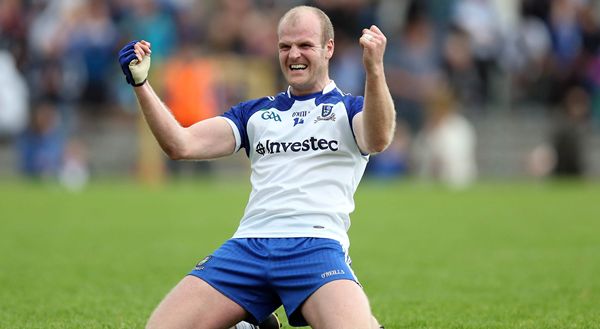 His young son Cailean, no older than four at the time, tracked his every step along the sideline that day, running up and down the stand as Clerkin warmed up for the game.

That stuck with him as it would any man. The sense of passing on the guard, the sense of inspiring your own as well as countless other youngsters. Not a bad way to go out, eh?

Three years on and Clerkin appears to have changed his tune though.

END_OF_DOCUMENT_TOKEN_TO_BE_REPLACED

Last week, the association announced that they would be increasing ticket prices for League games by a fiver while All-Ireland final tickets were to go from €80 to €90. This was predictably met with widespread opposition from gaels the length and breadth of this country - the majority of whom pay club memberships, devote hours coaching youngsters and bringing them to games, spend money on club fundraisers - the type of folk the GAA would be lost without.

But the Currin club man backed the association to the hilt for it.

"Anyone complaining about price of GAA tickets jog on," he tweeted.

His argument being that tickets to Thomond Park for a rugby match involving Munster were still more expensive than a League game and that the GAA are bang within their rights to stand over a third increase in ticket prices in the last eight years.

Which doesn't wash on a number of levels. One being that Munster Rugby are a professional organisation who employ full-time staff who obviously, have to be paid. Two, that these paying GAA customers are the ones who keep it going in the first place through their dedication and through their generosity.

But Clerkin kept on digging and on Tuesday on Off The Ball when the overwhelmingly accepted notion was put to him that having kids pay €80, soon to be €90 for an All-Ireland final ticket was a farce, he went and dug a little more.

"With all due respect, an 8-year-old has no business at an All-Ireland final for €90," Clerkin said.

"I was never at an All-Ireland final when I was an 8-year-old.

So kids, the future, the ones we are trying to inspire shouldn't be there, shouldn't be discovering memories and tasting the magic on the biggest stage of all.

Predictably, he was shut down from all angles.

Dick Clerkin "An eight year old has no business at an All Ireland Final.."

Agreed! Absolute muck from Dick Clerkin to suggest children have no place at an all-Ireland final. It’s on days like those that the next generation of players and fans fall in love with the game. Shows where heads are at currently, a quick buck over nurturing the game. #GAA https://t.co/nPuvvvVNP4

But somehow, he found the energy to dig some more. Taking back his exclusion of eight year olds, before going for it again.

If everybody was on that side of it then a certain Mr Clerkin would be minus at least one treasured memory...


popular
Robbie Henshaw one of three Irish players deserving of Lions Test XV
The SportsJOE 12 o'clock quiz | Day 309
Referee Mathieu Raynal puts Sexton in his place after TMO mess
Michael O'Leary stands by Gordon Elliott despite "grievous" lapse in judgement
Jamie Redknapp's face after going toe-to-toe with Roy Keane as Matt Doherty caught in the crossfire
"I feel it is important to provide people with some context surrounding this photo."
Ireland release Craig Casey, Bundee Aki and 11 more back to provinces
You may also like
1 year ago
You'd love to have Niall Kearns on your team
1 year ago
Magheracloone: Back from the brink
1 year ago
How Monaghan club recovered from losing it all in a tale of determination and unity
1 year ago
Ciaran Thompson's joke of a left peg shows Naomh Conaill can do it every way
1 year ago
Defenders do everything right yet Conor McManus kicks boomer off balance and off the left
1 year ago
Penalties the name of the game but surely there's a better way
Next Page