Diarmuid Connolly named to start for St. Vincent's but doesn't line out

Another twist in the tale.

This last year has been a very eventful year for Diarmuid Connolly. The Dublin star's recent absence has been the talk of the county and beyond.

Ever since he laid his hands on linesman Ciaran Branagan's chest in Portlaoise, he hasn't been able to reclaim his place on the Dublin football team. Reports began circulating that he was set to take a break from football in order to join up with Pat Gilroy and the Dublin hurlers. However, Jim Gavin has been insisting that he was merely being rested and that he was not cut from the football panel.

END_OF_DOCUMENT_TOKEN_TO_BE_REPLACED

The uncertainty surrounding Connolly extended to the club scene. Connolly, who has been one of the key hurlers for St Vincent's in recent times, was a notable absentee in their panel for their Dublin Senior A Round 1 clash against Raheny last weekend.

Despite being named at centre forward on his club's starting XV for their Dublin Senior A opener against Skerries Harps in Parnell Park on Thursday, Connolly didn't start the game as this seemingly never-ending sage took another twist.

The 30-year-old was key to St Vincents winning a third consecutive title last October, scoring the decisive goal in their 1-8 to 0-8 victory over Ballymun Kickhams. 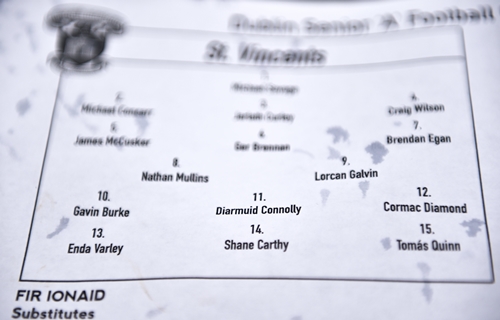 
popular
Roy Keane reacts to Brazil's jubilant celebrations in first half demolition job
World Cup 2022 Day 16: All the major action and talking points
Portugal boss could strip Cristiano Ronaldo of captaincy
Roy Keane handled Gary Neville’s goal celebration as most Irish fans would
Rory McIlroy explains 'falling out' with Shane Lowry that lasted a few years
Roy Keane cracks up ITV pundits with description of Senegal supporters
Ronaldo finally reveals why he got that hideous haircut
You may also like
2 weeks ago
"I was living day to day" - Shane Carthy and Cormac Ryan open up about their past and present struggles
2 weeks ago
"I'll try get that little bit faster, that little bit fitter. I'll try to put on a bit more weight" - How Gannon aims to improve during off-season
2 weeks ago
"I couldn't get over the amount of differences between the hurling and the football" - Leaving hurlers was never an option for O'Donnell
3 weeks ago
Shocking scenes as brawl extends into the stands during Oulart-the-Ballagh vs Naomh Barróg
3 weeks ago
"We've kind of gone away from stats" - the personal goals Dias sets for himself each game as a midfielder
1 month ago
GAA JOE Team of the weekend
Next Page