It was show-down weekend in Munster, the same in Leinster and, if that doesn't do it for you, well, you had the All-Ireland under-20 final there as well.

So what will we talk about boys? The split season? You took the words right out of my mouth.

'The club v county debate rumbles on' was how RTE packaged but, on that subject and over the last few weeks, it would be more accurate to say there's been more rumbling from full stomachs and there's been more debates in empty rooms. 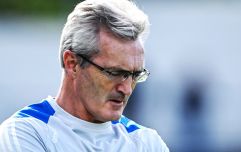 END_OF_DOCUMENT_TOKEN_TO_BE_REPLACED

Because that club v county debate, for the time being anyway, is dead in the water, it's spilt milk and, for anyone that isn't a pundit on The Sunday Game, it's for another day. And that's being generous.

All over the country, supporters have moved on from their first Sunday in September hang-ups and so have inter-county players because, instead of training like mad-men for months without a game, they are playing games, actual games on a consistent basis.

Supporters see the benefit of that and, between the two of them, they're enjoying this seven month inter-county season for what it is. The players will play with their clubs for the remaining five months - alongside their club-mates - and the supporters will support them.

It might work, it might not, but surely there's no point writing it off before it's even started.

END_OF_DOCUMENT_TOKEN_TO_BE_REPLACED

There are times, it must be said, when, people like myself are guilty of romanticising the club game and the woman who makes the tea and the fella who lines the pitch and la-de-dah-de-dah, but the bottom line is that it deserves better than what it was getting. Mid-summer uncertainty. Wintry club championships. Fit-them-in-whenever-you-can fixtures.

In this first proper split-season, it does now seem to be better - we might have a different outlook at the end of the year - but, on the grand scheme, the general consensus seems to be, at this remove,  that we'll let it run and we'll see where we stand then for a finish.

But if you were watching RTE on Sunday you'd have picked up a very different general consensus.

Like a member of the Artane Boys Band who's still trying to get to the beat of Amhrán Na bhFiann 20 minutes into the first half of an All-Ireland final, Donal Óg Cusack has been banging this drum for weeks. Anthony Daly has been going about it too and now Liam Sheedy has joined the party.

The three of them stood together and then, ready-steady-go, Joanne Cantwell teed them up for a 'debate' that would more accurately have been called an echo chamber.

Sheedy says that it's too early but, apart from making the point that Conor Whelan and Daithí Burke signed hurleys and sliotars in Pearse Stadium on Saturday night, he didn't really flesh that one out. Whelan and Burke have been doing that for the last four weeks, they've done it during the League too and you'd have to wonder would it make that much of a difference if they signed those hurleys in July instead of May.

Anthony Daly said that "I'm not 100% certain Joanne but from whatever I could gather last night, the Dublin hurling championship is not starting until September." The reason he wasn't 100% certain is because it's starting on the third week in July.

Donal Óg Cusack talked about inter-county players facing a 12 month season if their club made it to a county final but, in reality, the whole reason behind this condensed season is to stop that kind of thing from happening.

Your Waterfords and Tipp's and Westmeaths would sure as hell prefer to have more county games to come but now, after living like monks for seven/eight months, they can live a little. They can go to a stag or a wedding or a concert and, as Westmeath's Tommy Doyle touched on in his post-match interview, surely that's better than the way it was before.

The knocked out of the county? Let's drop everything and get the club going straight away kind of thing.

The Cork-man then mentioned 'the shop window' and the threat posed by rugby and soccer but, whether young people from Dublin, Tipp or Westmeath are just going to drop the hurls now because their team has been knocked out a month early is something that is very hard to measure.

And finally, he brought up the 'populist agenda.' The populist agenda, which, in this particular discussion, may well have been the only time he was on the money. Populism is defined as the political approach of appealing to ordinary people. Isn't that what GAA is supposed to do?


popular
Liverpool set £60m Mo Salah price as contract talks continue
QUIZ: How many of the 10 most successful football counties can you name without making a mistake?
Patrick Vieira claims he was 'much better' than Roy Keane in new interview
Matt Le Tissier says he asked Sky Sports why they never sacked Jamie Carragher
Éamonn Fitzmaurice explains Aidan O'Shea's best position and how it can be used against Kerry
Two All-Ireland quarter-finals to be streamed exclusively live on NOW
Ex-Real Madrid defender reveals he used to turn up to training drunk
You may also like
1 month ago
"It's becoming nearly embarrassing watching hurling at the minute" - Calls for hand-pass rule change in hurling
2 months ago
Rory Hayes a class act on and off the field as Clare destroy Tipp
2 months ago
"We kind of played a double centre forward to an extent." - The Tipp tactics that gave Limerick a fright in 2021
2 months ago
Liam Sheedy and Derek McGrath disagree on throw ball in Tipp-Waterford
2 months ago
Aussie Gleeson shows Waterford what they were missing with game-changer of a second half
2 months ago
Orla O'Dywer becomes first Irish female to win AFLW All-Star as Staunton somehow misses out
Next Page