Monaghan forward Conor McManus has been one of the pre-eminent forwards in Gaelic Football for the last few years and he continued to show why he deserves that tag with an exceptional score against Galway on Sunday.

Galway ultimately won the game 1-9 to 0-11 points as they got back to winning ways after a tough trip to Dublin last weekend where they were hammered by Jim Gavin's side.

A second-half goal from Johnny Heaney ultimately proved the difference between the two sides in Inniskeen in a game that didn't always set the world alight.

Galway playing with a strong wind and Dropping everyone behind the ball. They’ve scored one point in 27 mins and conceded 4. It’s actually laughable

Galway are a defensive team.They position players that don’t mark man to man but do mark space.Kerry despite everyone telling me they are. They are not. Like Dublin they go man on man and track back.Galway don’t trust their players to do it and yet to score with a wind!!!!😫🥴🏐 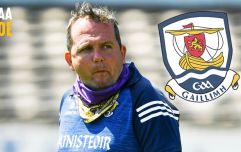 END_OF_DOCUMENT_TOKEN_TO_BE_REPLACED

McManus has spent years grafting away with Monaghan and last year his side made the All-Ireland semi-final where they ultimately fell short at the hands of Tyrone.

It's a remarkable achievement given the population of the county but McManus was adamant that his side should not have been held to that metric.

“People are always saying that, 'punching above your weight', but it's nearly condescending,” McManus told GAA.ie.

“Are you supposed to just stay in Division Three or Four for the rest of your life and just let everybody else at it?

“Are we supposed to not try, and not train hard, and not work to better ourselves. It's as if people expect you to stay down there and be done with.

“We've been in Division 1 now for the last four or five years and on an upward curve, we've won a couple of Ulster titles.

“We're competing for All-Ireland Quarter-Finals, Semi-Finals for the last number of years and we feel that's where we belong.

“For people to come along and say you don't really belong there or you're doing well to be there and saying well done for coming this far, we'd actually be disappointed by how the year has ended."

Monaghan have won just one game so far in the league campaign after their opening round win over Dublin was quickly dismissed by last weekend's loss to Roscommon.


popular
Solskjaer gamble on Harry Maguire backfires in most horrendous way
WATCH: Munster fans in Paris pay tribute to Anthony Foley with spine-tingling Fields of Athenry rendition
José Mourinho swaps Conor McGregor a Roma jersey for some whiskey
GAA at its best as Bellaghy players run into team-mate who buried his father that morning
"I'll go back running the roads now and make sure my body doesn't get lazy"
Alex Ferguson wrote Mickey Harte a letter - ex Tyrone boss reveals in new memoir
Jeff Stelling loses it during Soccer Saturday after Brighton was denied a blatant penalty
You may also like
1 month ago
Dervan's ever-lasting commitment to Galway camogie an inspiring thing
1 month ago
Galway hoping for red card reprieve after reaching All-Ireland Final
2 months ago
"Any team I've been involved in over the last five years, they've been way above their station" - GPS stats gone too far
3 months ago
Harry Maguire ain't got nothing on Mayo under-20's sensational sudden death penalty
3 months ago
Galway win the minor with a goal worthy of winning any game
3 months ago
"As a young lad coming in, you'd be chuffed if you got a score at all" - Canning's charge for record books began in 2008
Next Page