"Are the GAA's penalties severe enough?"

After an unbelievable game, we are unfortunately forced to talk about the melee that broke out at full time between Armagh and Galway.

The scenes were disgraceful in some instances, and it draws the eye away from the fantastic football that was on display.

Speaking on The Sunday Game, Kerry's Colm Copper believes that the punishments need to be more severe if the GAA are going to stamp out this behaviour for good. 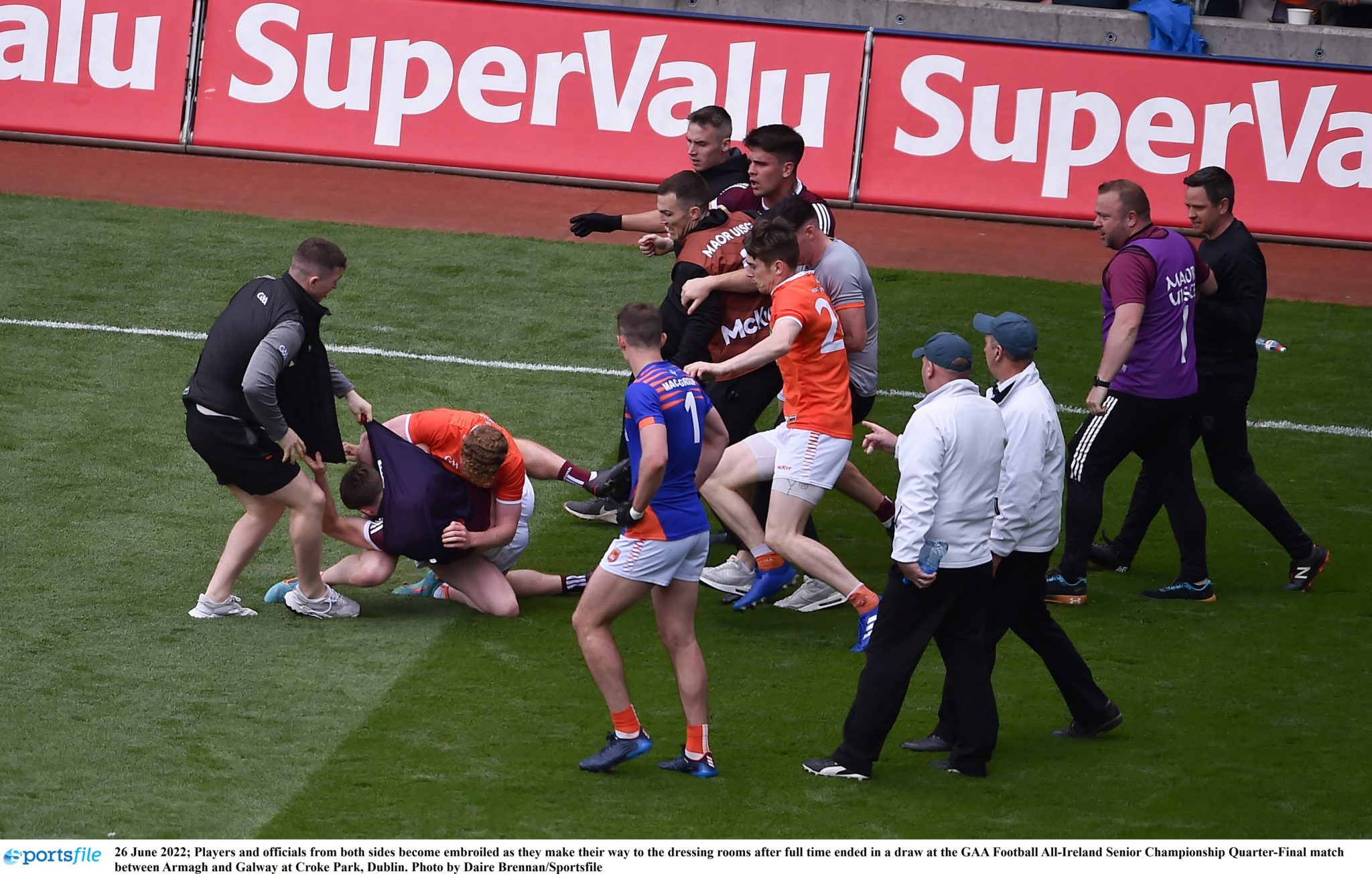 "Are the GAA's penalties severe enough? Are they dealing with these in an appropriate way?" he queried.

"Are they doing enough? Because they come and we see them in club games, we see it in inter-county games."

He said that "harsher penalties and more severe" punishments were required, with the "disgraceful" eye-gouge as an example. 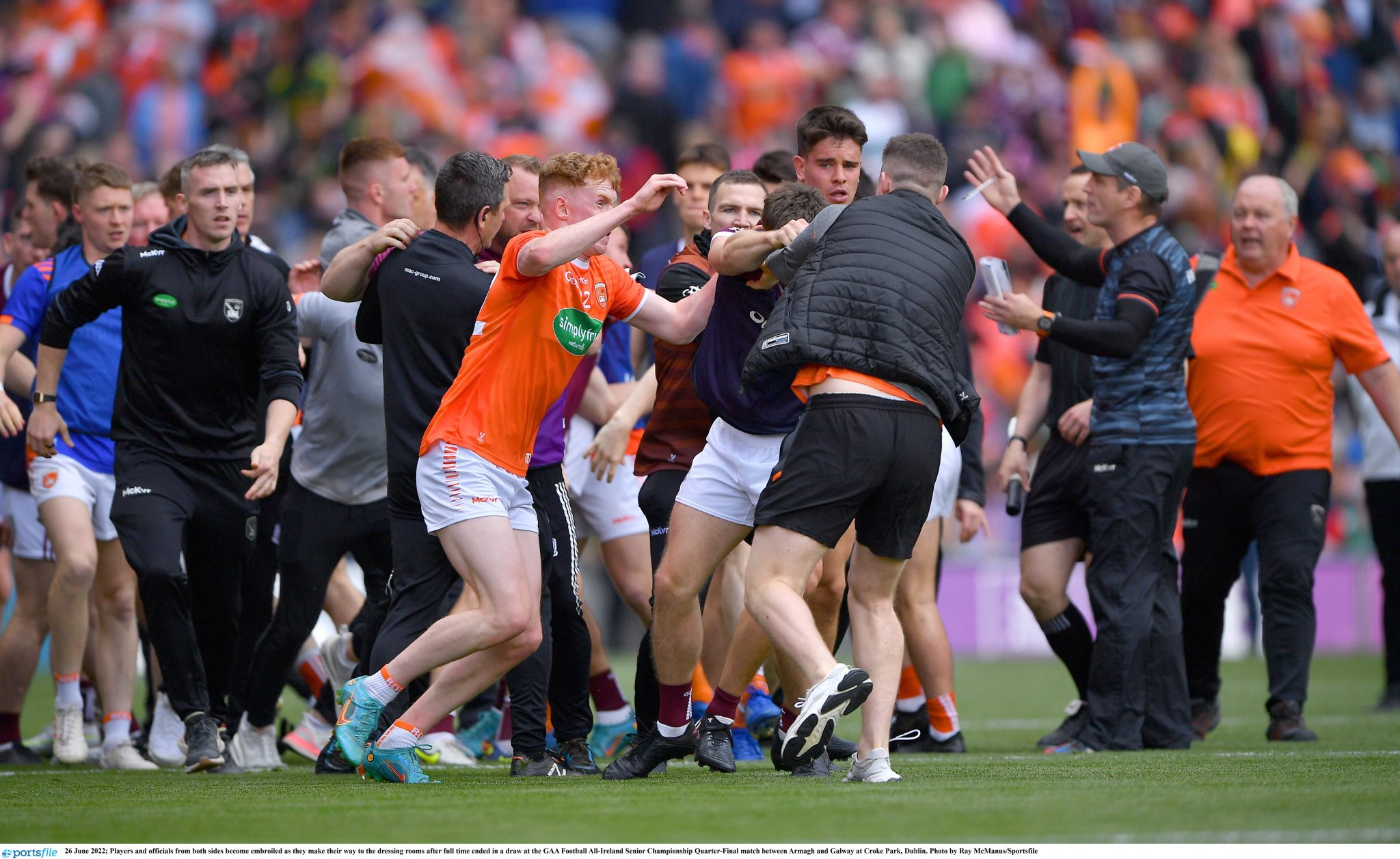 END_OF_DOCUMENT_TOKEN_TO_BE_REPLACED

"Two guys I have sympathy for and can't understand is Seán Kelly and Aidan Nugent," he said.

Outside of that, the fact that the game was the first ever penalty shoot out in Croke Park, is almost a secondary talking point, but has proven to be just as controversial.

Alongside Cooper was Tyrone's Sean Cavanagh, and he didn't hold back when voicing his opinion on finishing an All-Ireland quarter final in such a manner.

The #SundayGame questioned the decision to send off Armagh's Aidan Nugent and Galway's Seán Kelly while Colm Cooper asked whether the GAA's penalties are severe enough. #RTEGAA pic.twitter.com/KFVy5D7llo

"At this stage of the championship I think it's totally unacceptable to lose an All-Ireland quarter-final on penalties," he said.

"It's not the fundamental skills of the game and we all were looking for more. Bringing those two teams to Croke Park next weekend would have been what everyone wanted.

"An extra week in the championship at this stage was in my mind, what should be happening here."


popular
Roy Keane cracked up Ian Wright and Gary Neville with England team spirit remark
'I was so stressed the week before the All-Ireland and I ended up having a panic-attack' - O'Shea and O'Sullivan open up
Roy Keane shoots down ITV presenter's 'excuse' for England's draw with USA
World Cup 2022 Day Seven: All the major action and talking points
The confirmed World Cup pundits for RTE, ITV and BBC have been released
The nine England World Cup footballers who could have played for Ireland
'Just a bit of PR' - Roy Keane and Ian Wright have their final say on OneLove armband U-turn
You may also like
2 weeks ago
Munster, Connacht and Ulster GAA clashes stack your TV guide this weekend
2 weeks ago
Jamie Clarke takes sabbatical from soccer to commit to Crossmaglen
3 weeks ago
Paul Finlay reveals secret to high performance in your late 30s
3 weeks ago
The one moment that shows why David Clifford is the best player around
4 weeks ago
Quiz: Can you name these intercounty GAA teams from their nickname?
4 weeks ago
The five most unlucky players to miss out on an All-Star
Next Page