That should be enough. The University of Limerick are on the hunt for their first ever Sigerson Cup title and with the Fossa freak in their ranks, it would take a brave punter to bet against them.

Clifford has ripped the competition apart with 5-16 to his name in just three games to date and on Thursday night, in Netwatch Cullen Park, the UL crew will be hoping for more of the same.

END_OF_DOCUMENT_TOKEN_TO_BE_REPLACED

It's semi-final time and standing in their way are the reigning champions DCU who, having beaten both St Mary's and the Ulster University by a single point, will be playing with some confidence and belief themselves. Whether it's full back Shea Curran or corner back Mark Curran that faces the unenviable task of keeping Clifford quiet, one thing's for sure and that's that they've a job on their hands.

Clifford aside, Declan Brouder's team also have Sean Powter and the in-form Emmett McMahon knocking around though Eoghan McLaughlin will be a huge loss, the Mayo man having been stretchered off against Monaghan in the League last weekend.

DCU are no slouches though and with Jordan Morrissey and Red Óg Murphy as their star men, Paddy Christie's team won't give up that crown easily. All told, it should be an exciting game and that's all the more reason to watch the Electric Ireland stream from 7.30 tonight. 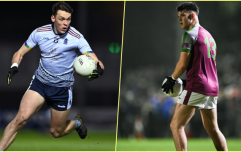 END_OF_DOCUMENT_TOKEN_TO_BE_REPLACED

MTU Kerry take on NUIG in the other semi-final in Rathkeale and with Tommy Conroy sidelined for the Galway college, you'd have to fancy the Kerry side for whom Tony Brosnan has been shooting the lights out.

That game will also be streamed from 6.00 here and if somehow you haven't had your fill of GAA action by then, you can tune into TG4 who will be showing Corofin legend Kieran Fitzgerald's Laochra Gael from 9.30.

You may also like
11 months ago
James O'Donoghue slams GAA calendar following Tommy Conroy's cruciate injury in Sigerson Cup
11 months ago
Tommy Conroy picks up concerning injury playing in Sigerson Cup just 48 hours after playing full game for Mayo
1 year ago
NUIG manager praises Jordanstown's sportsmanship for conceding Sigerson Cup game after horror injury
1 year ago
On a wet November night, David Clifford lights up the Ryan Cup with an absolute rocket
3 years ago
Club player in Cavan sums up beauty of the Sigerson Cup
3 years ago
Monaghan livewire lights up Glasnevin to seal Sigerson glory for DCU
Next Page