Defending will only get you so far. These lads are a one trick pony. If they're not found out in Donegal, they'll get a rude awakening in Ulster.

Throughout the Donegal championship and not just this year, 'Glenties' have been under the microscope. They've been getting it from up and down the country.

Their style of football is outdated they said, you can't win games like that, they said.

These lads don't really mind. They've great footballers in that little club and they've heart to beat the band too.

They have detractors and doubters aplenty but Naomh Conaill won't give a damn because they're through to the Ulster senior football final.@NaomhConaillGAA 0-12 Clontibret 0-9.

What the rest of them all ignored is that Martin Regan's west Donegal side have much more up their sleeve than just a rigid defensive plan that can keep out the best of forwards like Conor McManus, like Kevin Cassidy, like Cian Mackey.

That matters too you know. 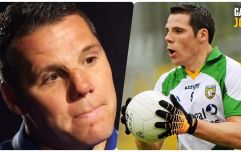 END_OF_DOCUMENT_TOKEN_TO_BE_REPLACED

And on top of that - the fierce, disciplined tackling style - Naomh Conaill have Ciaran Thompson too, and they know well how to use him.

Thompson is one of the most gifted players in Ulster with his farce of a left foot and sprightly running style - but he's far from out on his own up around here. Eoghan McGettigan can kick points for fun. Ethan O'Donnell will be a big player for Donegal in the future. Then you've stalwarts 'Brick' Molloy and Anthony Thompson driving them on.

This is a serious unit and they're not stopping yet.

They're into the Ulster final now and on an an icy Saturday night in Omagh, Naomh Conaill showed that they'll be hard beaten by any club football team in the country.

That man McGettigan - the rising Donegal star - was man-of-the-match at the end of their 0-12 to 0-9 win over Monaghan champs Clontibret but once again, it was all about Ciaran Thompson.

The midfielder has been bubbling on the county scene for a couple years now, ready to boil over. On the club scene, he's a different beast and his left peg is on a different level.

His first score of the night was Ciaran McDonald-esque. Little one-two, little clap before he receives it. The Naomh Conaill crowd know where it's going.

A slingshot over the bar, it cuts through the Tyrone night sky.

This man's left foot is conquering the whole of Ulster for @NaomhConaillGAA 🔥🔥pic.twitter.com/hpblxPcfVh

And then, just a half an hour later, he was at it again landing a free from God knows how far out.

Some player. Some team.


popular
In 86 seconds, Patrick Bamford becomes English football's voice of reason
'Make him hurt, make him yours' - How the Springboks ruled the world
Springboks legend Tendai Mtawawira tells us what he really thinks of Ellis Genge
Jose Mourinho is about to step up and become the hero football needs
"We did find him hours later and we made up." - How Flynn and his best friend came to blows in Croke Park
'Beast' Mtawawira is a big fan of Mike Ross' Lions front row
Football's greatest heist has been happening in broad daylight for years