"It takes away from the skill of the game."

On this week's episode of PlayXPlay we're joined by Dublin Camogie player Laura Twomey and Leinster Rugby's Megan Williams. With our host Jenny Murphy we're taking a look back at the weekend's action, discussing the importance of bench players and dissecting whether Camogie players deserve to shoulder their opponents (we think they should).

Watch the full episode below:

The rule differences between camogie and hurling have been well documented. From physicality to the handpass goal rule, these differences affect a number of aspects of the game which camogie players are well versed in. Now, with increased coverage, camógs are speaking out about the difficulties they face as players due to these outdated rules. Refereeing inconsistencies and the free-flowing nature of the game are some of the obstacles they're facing which Laura explained to us:

The handpass goal in particular strikes a chord with most of the women playing at senior level:

"I think it takes away from the skill of the game and girls are well able to strike it we've seen it in the semi-finals there's some really good goals on show.

"The other element is that we can also drop the hurley to handpass the ball so in hurling you have to use one hand and keep the hurl in your hand at all times." 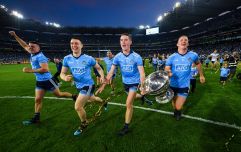 END_OF_DOCUMENT_TOKEN_TO_BE_REPLACED

Another issue that Laura highlights on PlayXPlay is the 'skort' rule. In camogie, women are obliged to wear skorts (a form of short/skirt combo) whereas hurlers can wear shorts!

It's definitely one battle at a time for camógs across the country, but what we learned from Laura this week is that the players know what's best for the game and although they'll wear the skorts for now... they can certainly take the hits, so let them shoulder!

You can listen to the full episode of PlayXPlay here.

popular
The SportsJOE 12 o'clock quiz | Day 140
Only a Champions League fanatic would get full marks in this quiz
"There's times I do think I probably have let people down but in fairness, I have got good support from back home"
Getting 20/20 in our Champions League quiz would be a miracle
Frustration boils over for Shane Lowry at PGA Championship
Jonny Hayes and Aberdeen teammates apologise after Covid cluster shutdown
Rory McIlroy speaks superbly on conscience call that cost him at US PGA
You may also like
9 months ago
QUIZ: Can you guess the GAA jersey sponsor?
9 months ago
"You don't want to do it to sit on the bench - it can weigh you down"
9 months ago
QUIZ: How well do you remember Dublin GAA's historic 2018/19 season?
9 months ago
The five key head-to-head battles Ireland need to win against New Zealand
9 months ago
PlayXPlay | Nicole Owens interview on ACL rehab and helping the team when injured
10 months ago
PlayXPlay | "I want to go partying with Ciara Mageean"
Next Page