Monaghan corner-back Barry Kerr was red carded in his side's two-point win over Kerry on Sunday after a melee involving teammate Conor Boyle and the Kingdom's Paul Geaney and Sean O'Shea.

Clifford claiming he was hit in the family jewels pic.twitter.com/uPYGpONKB3

A brawl ensued in the 60th minute with Kerr receiving a red card from referee Cormac Reilly for his part in proceedings.

Monaghan hung on to clinch their second consecutive league win over Kerry, but television replays appear to show Kerr making contact with the eye area of Kerry full-forward Paul Geaney.

In a separate scuffle in the background (seen in the tweet above), midfielder David Clifford emerged from the bottom of a pile and had gestured to Reilly that he had been hit in the testicles during the melee. 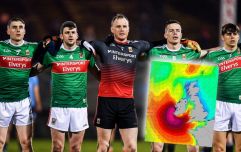 END_OF_DOCUMENT_TOKEN_TO_BE_REPLACED

Clifford and Monaghan defender Drew Wylie both received yellow cards for their part in the incident.

Monaghan led by seven points at one stage and held on to earn a hard-fought two-point win in Inniskeen.

Conor McManus led the way for the Farney Army with 1-3 while Jack McCarron chipped in with 0-4, 0-3 of which was from frees.

The victory gives Malachy O'Rourke's side back-to-back Allianz Division One league wins over Kerry with Monaghan now third on the table behind leaders Dublin and second placed Galway.


popular
Jose Mourinho is the picture of happiness and health after Spurs sacking
'Make him hurt, make him yours' - How the Springboks ruled the world
In 86 seconds, Patrick Bamford becomes English football's voice of reason
Springboks legend Tendai Mtawawira tells us what he really thinks of Ellis Genge
'Beast' Mtawawira is a big fan of Mike Ross' Lions front row
Jose Mourinho is about to step up and become the hero football needs
"We did find him hours later and we made up." - How Flynn and his best friend came to blows in Croke Park
You may also like
1 year ago
TG4 announce clatter of fantastic GAA fixtures for 2020
2 years ago
Aaron Gillane and Cian Lynch superb as Limerick claim league title
2 years ago
"I’ll be trying to glean a few gems of wisdom from him throughout the year"
2 years ago
"There are a few other things I can do but I mightn’t have shown them yet" - more to come from Brian Howard
2 years ago
Seanie O'Shea releases inner Maurice Fitzgerald with sideline missile
2 years ago
Gillane and Duggan shootout in the rain, Offaly warn Carlow, Laois put it up to Dublin
Next Page