Canning pulled up lame after the loss and could now spend up to 16 weeks on the sideline which would theoretically rule him out for the remainder of Galway's season unless the Tribesman make a deep run in the All-Ireland hurling championship.

Galway GAA confirmed the news in a statement on their website.

END_OF_DOCUMENT_TOKEN_TO_BE_REPLACED

"On Sunday March 24th, Joe Canning injured his groin in the Allianz National Hurling League Semi-Final against Waterford. The injury will require surgery and there is an expected recovery period of between 14 to 16 weeks.

"On March 17th, Fintan Burke damaged his cruciate knee ligaments in the AIB All-Ireland Club Hurling Final playing for his club St. Thomas. The injury will require surgery and Fintan will not be available to play for the remainder of the 2019 season.

"Galway GAA wish both Joe and Fintan all the best in their recoveries and will be providing them with all the necessary medical supports to aid them. 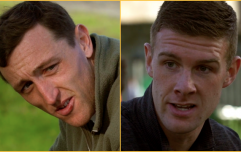 END_OF_DOCUMENT_TOKEN_TO_BE_REPLACED

Commenting on the loss of Canning, Galway Senior Hurling Manager Micheál Donoghue said “I, and all the team wish Joe and Fintan a speedy recovery from their injuries. They were both very unlucky to pick up injuries at this stage in the season.”

“Even by his own high standards, Joe Canning’s performances this year have been exceptional. He is in good spirits and has a positive mindset facing surgery and rehab period.”


popular
Gary Neville sticks up for Ronaldo as contextless pictures and videos taken as gospel
World Cup 2022 Day 18: All the major action and talking points
Rory McIlroy explains 'falling out' with Shane Lowry that lasted a few years
Brazil star responds after Roy Keane slates dancing celebrations
Cristiano Ronaldo's sister blasts Portugal boss' decision to start forward on the bench
Eniola Aluko responds to criticism after on-air mistake on ITV
Ballyhale's Colin Fennelly felt Ballygunner's victory speech was disrespectful
You may also like
3 weeks ago
More shocking footage from Parnell Park emerges, as Leinster GAA condemn brawl
1 month ago
The late Damian Casey has been honoured with Hurler of the Year award
1 month ago
Hurling finals and provincial action all on TV this weekend
2 months ago
The four types of people at every GAA AGM - Annual General Meeting
2 months ago
GAA members found guilty of abusing officials could be sent on referee courses
2 months ago
The top seven best lines that GAA managers have said
Next Page