A staff member at the Crowne Plaza in Perth told the Australians they might be 'stuck for a while'. We suspect his name badge may have read 'Murphy' or 'O'Toole'

Nine of the Australian team taking part in this Saturday's IRS against Ireland were stuck in a hotel lift for over 30 minutes in the early hours of this morning.

Port Adelaide's Chad Wingard posted a video soon after the players' rescue, during which a hotel employee says, 'You guys are going to be there for a while... up to 30 minutes.'

Stuck in lift 1 at crown Metropol 1.. Someone please get us out!!!! Nic Nat getting restless @joelselwood14 @chadwingard 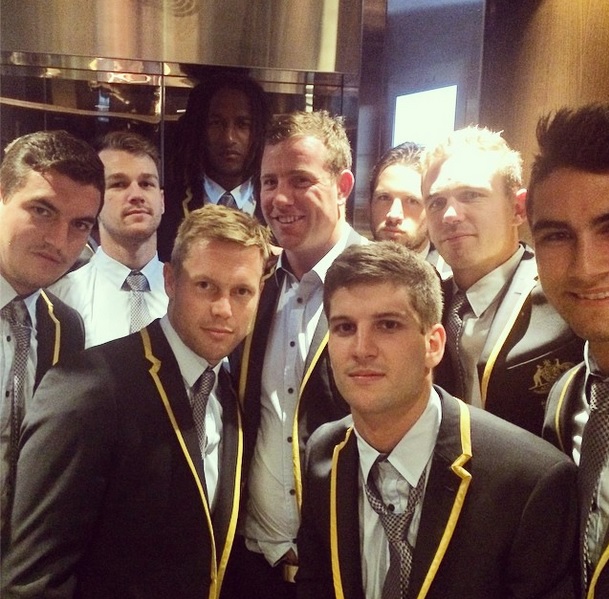 'We weren't in trouble at all,' said Australian captain Joel Selwood. 'It was good for team bonding.'

Hope for Ireland yet if these nine desperadoes can't find their way out of a lift.


popular
CCCC order replay of All-Ireland club football final
Shane Lowry confirms amicable split from caddie after four and a half year partnership
Owen Farrell praises Johnny Sexton in revealing interview ahead of Six Nations
January transfer window 2023: Follow the latest updates live in our hub
Kilmacud Crokes to counter Glen's objection over extra players in All-Ireland final
British publication urges Gareth Southgate to claim Evan Ferguson for England
Everton release brutal 59-word statement to confirm Anthony Gordon departure
You may also like
1 month ago
Olivier Giroud responds after claim he pretended he couldn't speak English to avoid jersey swap
1 month ago
Melbourne derby abandoned after goalkeeper is smashed in the face with bin
2 months ago
World Cup 2022: All the major action and talking points from Day Three
2 months ago
Bundee Aki reminded us all of his best qualities, on a night Ireland couldn't do without him
2 months ago
Matt Williams slammed for post-match take on Nic White being able to play on after head blow
2 months ago
"It's testament to the guy himself" - Peter O'Mahony pays tribute to Michael Hooper after mental health break
Next Page